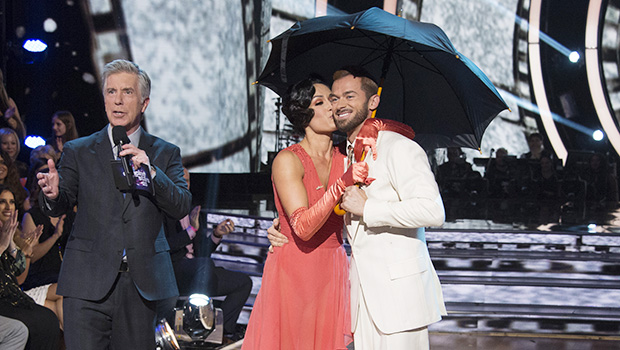 Nikki Bella said the door was ‘open’ for her and John Cena to get back together, but it was Artem Chigvintsev who walked through, as the two of them reunited for a romantic date!

If anyone was hoping that John Cena, 41, would rush to Nikki Bella’s side after the 35-year-old Total Divas star said that she was open to another shot at love…well, we have good news and bad news. The good news is that a gorgeous hunk did meet up with her for wine and cheese. The bad news – for Nikki/Cena shippers – is that it wasn’t John, but her former Dancing With The Stars partner, Artem Chigvintsev, 36. Artem stoked those rumors of a romance between him and Nikki by posting a video to his Instagram story of him joining Nikki for a lovely dinner date, as they smiled while clanking their glasses together. Cheers!

Rumors of a relationship between these two started popping up at the start of the year, but a source EXCLUSIVELY told HollywoodLife.com that things were still “casual” between these former DWTS partners. “They enjoy hanging out and spending time with one another. [Nikki’s] truly just having fun and not looking for anything more right now.” Nikki certainly was having fun when she met up with Artem for a flirty lunch date, as seen on the Jan. 27 episode of Total Bellas.

Nikki and Artem were paired up on the 25th season of Dancing With The Stars. As she competed, her then-fiancé John was there to cheer her on. About six months after the season ended, so did Nikki and John’s engagement. The couple called it off weeks before they were set to wed in Mexico. They reunited but called it off again, and Nikki has moved on….sorta. While speaking EXCLUSIVELY with HollywoodLife.com at The 20th Annual Women’s Image Awards in Beverly Hills, she said that “the door is always open” to her and John reconciling.

Though, if John waits too long, he’ll miss his chance. In addition to Artem wining and dining Nikki, The Bachelorette’s Peter Kraus is going after Nikki’s heart. And, as they say, the path to a woman’s heart is through her sweet tooth – or something like that. In a preview of the March 3 episode of Total Bellas, Nikki receives a package of black licorice from Peter, as he knew it was her favorite candy of all time. Maybe that door isn’t so “open” anymore?