After seeing Will Smith smack Chris Rock over what he said about Jada Pinkett-Smith, Nicki Minaj defended the ‘King Richard’ actor for standing up for ‘the woman he loves.’

Nicki Minaj entered the “Will Smith slapping Chris Rock discourse” on Monday (Mar. 28) morning, offering her take on the physical confrontation between Will, 53, and Chris, 57, at the 94th Academy Awards. First, Nicki, 39, supported the comedian, tweeting, “I love Chris Rock. I don’t think he would’ve made that joke had he known what Jada recently shared- but between him & the whole team @ the #Oscars you mean to tell me not ONE of y’all heard this woman just share this heartbreaking story? #ComeOnSon.”

“Here’s the thing… And this is such an AMAZING – EYE OPENING example of it…,” continued Nicki. “The husband gets a front row seat to his wife’s pain… he’s the 1 consoling her… drying her tears behind closed doors when those cameras go off. Social media has made ppl feel that these ‘husbands’ won’t ever run into them in real life. You just got to witness in real time what happens in a man’s soul when he looks over to the woman he loves & sees her holding back tears from a ‘little joke’ at her expense. This is what any & every real man feels in that instant. While y’all seeing the joke, he’s seeing her pain.

Nicki shifted the focus to Jada’s open battle with alopecia, the autoimmune disorder that causes people to lose their hair in large clumps. Nicki argued that people like Chris (who produced and narrated the 2009 documentary Good Hair about Black women’s relationship with their hair) should be more sympathetic. “Imagine what it must feel like to be losing your hair to the point where you have to shave it bald. You think that’s easy to deal with for anyone?” the rapper tweeted. “You don’t think she’s cried about that many times? 2022 y’all gon have to see these men about those jokes you made about their wives.” 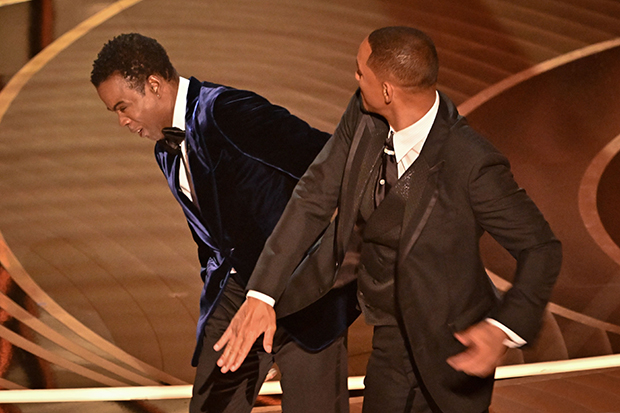 Jada revealed her struggle during a 2018 episode of Red Table Talk. “It was one of those times in my life where I was literally shaking with fear,” she said when describing the moment she lost “handfuls of hair” in the shower, per CNN. “That’s why I cut my hair and continued to cut it,” she said. Jada also revealed that she’s unable to determine the cause of the disorder but suspects it might be stress. Since then, she’s made peace with the condition. In a December 2021 Instagram video, she showed off her shaved head. “Me and this alopecia are going to be friends,” she captioned the clip.