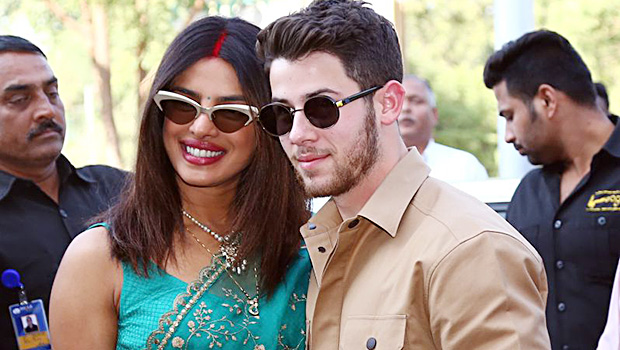 Introducing…Mr. and Mrs. Jonas! Newlyweds Nick Jonas and Priyanka Chopra stepped out for the first time since their wedding in India on Dec. 1 and 2, and they looked SO happy and in love. See the pic here!

Nick Jonas, 26, and Priyanka Chopra, 36, are officially husband and wife, and they had that newlywed glow when they were photographed arriving in Delhi to continue their wedding celebrations on Dec. 3. The gorgeous bride looked stunning in an emerald green dress, which featured a floral pattern in a tan color that matched her man’s beige ensemble to perfection. Photographers snapped away as the lovebirds posed for photos, and they could not look happier together. Nick even protectively placed his arm around Priyanka as they made their way through the crowd!

During the outing, Nick’s wedding band was on full display — a symbol of the commitment the two made to each other in a multiple day celebration over the weekend. After indulging in traditional Indian pre-wedding activities at the end of last week, Nick and Priyanka tied the knot in a Christian ceremony AND Hindu ceremony over the weekend paying tribute to both their religions and cultures. Of course, Nick’s brothers, Joe Jonas, Kevin Jonas and Frankie Jonas, were in attendance, as was Joe’s fiancee, Sophie Turner.

Ahead of their wedding, Nick and Priyanka shot a spread and cover for Vogue, which they posted to their respective Instagram pages with the caption, “Just us.” In the article, the two revealed they started texting after Nick DMed Priyanka on Twitter in Sept. 2016. However, it wasn’t until the Vanity Fair Oscar Party in 2017 that they met for the first time. At that event, Nick declared his love, but they didn’t meet again until just before the 2017 Met Gala — the pair were attending the event together to represent Ralph Lauren, but the designer didn’t know about their texting relationship up until that point.

Priyanka invited Nick to her apartment ahead of the Met Gala, but things didn’t get physical. After that, they didn’t see each other until the NEXT Met Gala in May 2018…one year later. This was the moment things shifted in the relationship, and Nick finally asked Priyanka out. They were engaged by mid July — and the rest is history!