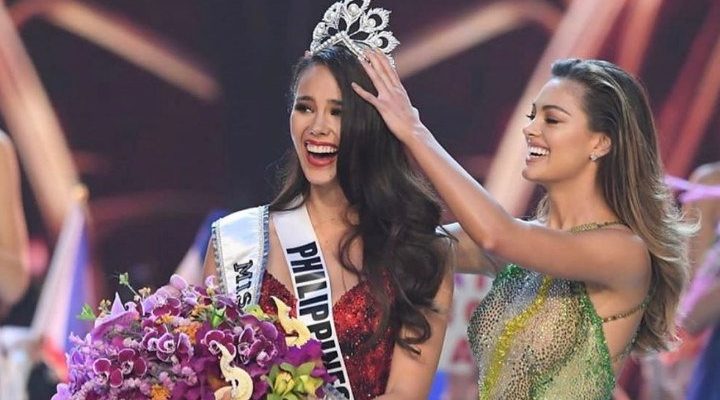 AceShowbiz -Meet the new Miss Universe! Catriona Gray won the 67th annual pageant show which was held in Bangkok, Thailand on Monday, December 17 local time. She edged out other contestants from 93 countries and territories.

Earlier in the show, Gray made it into the top three after answering the top five question, “What is your opinion on the legalization of marijuana?” She said, “I’m for medical use but not so for recreational use.” She further explained, “Because I think if people were to argue, what about alcohol and cigarettes? Well everything is good, but in moderation.”

Gray then advanced to the top three along with Miss Venezuela Sthefany Gutierrez and Miss South Africa Tamaryn Green. In the final portion of the competition, the three finalists were asked the “Final Word” question, “What is the most important lesson you’ve learned in your life and how would you apply it to your time as Miss Universe?”

Being the first to answer the question, she shared, “I work a lot in the slums of Tondo, Manila and the life there is… it’s poor and very sad. And I’ve always taught myself to look for the beauty of it, to look for beauty in the faces of the children and to be grateful.”

“And I would bring this aspect as a Miss Universe, to see situations with a silver lining, and to assess where I could give something, where I could provide something as a spokesperson,” she elaborated her plan. “If I could teach also people to be grateful, we could have an amazing world where negativity could not grow and foster, and children would have a smile on their faces. Thank you.”

Gray also sashayed the runway in her red gown which featured revealing cut-outs during the evening gown competition. She described her dress as “daring and different.” She gained attention for showing her signature “lava walk” on the stage.

Before the winner announcement, last year’s winner Demi-Leigh Nel-Peters walked the stage one-last time as Miss Universe. “Miss Universe gave me a global platform and a global voice,” she said of the competition. She vowed to continue her advocacy even after her reign, adding, “No woman deserves to be a victim of violence and crime.”

The show made history by having its first transgender contestant, Angela Ponce from Spain. She got a special video tribute on the show which highlighted struggles from childhood and her journey to make it to Miss Universe. “I don’t need to win Miss Universe. I only need to be here,” the 2018 Miss Spain said in the video.