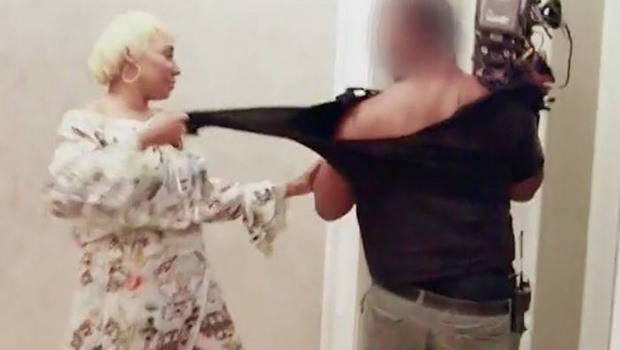 At NeNe Leakes’ infamous ‘Bye, Wig’ party, attendees were convinced that a cameraman said bye to his tooth. Porsha Williams even claimed that NeNe ‘choked up’ a producer, but the party host had a different story.

NeNe Leakes, 51, had a less violent recollection of the alleged events that transpired at her “Bye, Wig” party, which aired on March 3. During part three of The Real Housewives of Atlanta Season 11 reunion on April 21, Nene insisted that she only “pulled” a cameraman’s T-shirt for breaking her rule about entering and filming inside her closet at the party. “Well, him, but the other guy got choked up, scratched up, went to the hospital,” Porsha Williams, 37, said at the reunion, interrupting NeNe. This was news to her fellow Bravo star.

“Did he go to the hospital?…I didn’t hear nothing about that,” NeNe said, surprised. Porsha continued, “He absolutely did and absolutely had scratches on his back…Choked up and head drug against the wall.” And that’s when Kandi Burruss, 42, jumped in with a new accusation: “His tooth got knocked out.” Porsha, Cynthia Bailey, Eva Marcille and Tanya Sam all nodded along! NeNe tried to defend herself, saying that she “heard his tooth was cracked,” but took some accountability by adding, “nonetheless, it didn’t give me the right to touch him.”

Eva also tried to back up her castmate. She claimed that security “grabbed NeNe” after the party host pulled on the cameraman’s T-shirt. However, Porsha’s side of the story differed — again. The new mother claimed that security only interjected after NeNe allegedly “choked the producer.” Porsha added that the producer was supposedly “making sure that every move was on him from her,” and even dived into the climatic moment NeNe faced off with Porsha and Kandi inside her closet.

“And then NeNe comes in, and she said, ‘I said get out!’ And at that point, I felt a hand on my back, and my belt came off, and I went forward. So at that point, I was like, ‘Okay, you know what? She means it,’” Porsha continued. At this point, she summarized her accusations: “And once I walked on out the closet, that’s when I saw the man’s shirt ripped, and then I saw her choking up the producer. And that’s exactly what happened.” Meanwhile, on the same night that Bravo aired part three of the reunion, NeNe retweeted a theory that the closet confrontation wasn’t that dramatic: “So now we see MORE of the footage which shows @NeNeLeakes @iheartMarlo and @Porsha4real all laughing and walking calmly out of the closet while Porsha adjusts her belt. I think editing has help create this mess.”