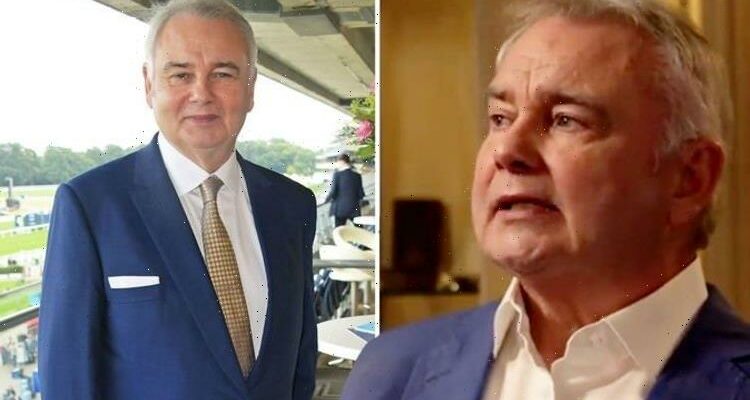 Earlier this month, Eamonn Holmes took to Twitter to tell fans he had pulled out of work commitments due to having coronavirus. At the time, the 61-year-old said he was halfway through isolating at his home where he lives with wife Ruth Langsford.

Today, his spouse issued an update as she jokingly likened Eamonn to a plastic skeleton to mark Halloween.

She shared a video of the skeleton buried in the ground next to a Trick or Treat sign while out for a walk with her dog Maggie.

In view of her one million followers, she wrote: “Happy to say @eamonnholmes is out of isolation today!

“Just need to feed him up a bit to get his strength back! Thank you for all your good wishes x x.”

Jayne Williams commented: “With your cooking, he will soon have his strength back.”

On October 26, Eamonn was inundated with well wishes as he revealed the virus had “finally caught me”.

“More than half way through my isolation and coping with the symptoms and effects well.

“Unfortunately I’m going to be a no show for some professional & personal events.

“Just want to let everyone know why & offer my apologies.”

In response to a concerned fan, he added he was “doing OK”.

Coronavirus isn’t the only health issue Eamonn has faced in recent months.

In April, he suffered chronic pain from a dislocated pelvis which resulted in his back being thrown out of alignment.

The following month, the broadcaster revealed that he had lost nerves in his right leg and had been using crutches.

In September, he admitted he would’ve struggled to stand up without his crutch during filming for his new show Farm to Feast.

On Instagram, he thanked the company Cool crutches for giving him the supportive mobility aid.

“Your crutch kept me standing,” he wrote. “Tough schedule but wonderful show and experience.”