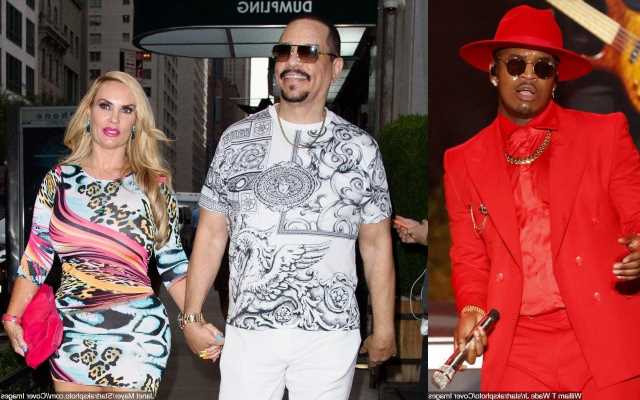 This comes on the heels of the divorce filing submitted by the ‘So Sick’ crooner’s wife Crystal Smith, who accused him of cheating with ‘multiple women’ and fathering a child with another woman.

AceShowbiz –Ne-Yo has raised people’s eyebrows with his bizarre confession. The “One in a Million” crooner sparked chatter after he confessed that he once asked Ice-T‘s permission to “squeeze” his wife Coco Austin‘s butt amid his infidelity issues.

In a preview of the Thursday, August 11 episode of “Drink Champs”, the “So Sick” hitmaker told host N.O.R.E. that after seeing Coco wearing a rather sexy costume at a [Halloween] party, he confessed his desires to Ice-T. “Mind you, I had had a few drinks at this point,” he began, “So, I walked up to him and was like, ‘Bro, with all due respect, uh, I’ve wanted to squeeze Coco’s a** for a really long time.’ “

Ice-T, whose real name is Tracy Lauren Marrow, allegedly told him, ” ‘You know what? I’m just the kind of pimp that’ll let you do it.’ ” Ne-Yo went on to say that the actor called his wife over and whispered what the “Miss Independent” singer wanted to do.

“She looked at him and smiled, then looked at me and smiled, and turned around and bent that thing over, and I grabbed as much of a handful as I could,” Ne-Yo recalled. “He gave me a pound, and we finished, and we drank and hung out for the rest of the night.”

In response to Ne-Yo’s wild story, the podcast host N.O.R.E., who looked baffled, said, “I’m trying to figure out who’s more gangster in this situation, you, or him or Coco. Or is it all three? I’m taking a shot for that, bro.”

Upon learning of Ne-Yo’s confession, many social media critics blasted him. “That’s why this dude getting divorced now! Smh,” one person commented, referring to divorce papers filed by Ne-Yo’s wife Crystal Smith. Another echoed, “That’s y he ain’t got no wife now smh n***as.” A third questioned, “This guy really cheated on his girl ????” with someone else adding, “So this is one of the reasons why your wife left you. Disrespectful!”

Ne-Yo’s estranged wife Crystal legally filed for divorce on August 1. Prior to the filing, she aired out her relationship issues with the father of her three kids in a since-deleted Instagram post.

“8 years of lies and deception. 8 years of unknowingly sharing my life and husband with numerous of women who sell their bodies to him unprotected… every last one of them,” Crystal wrote. “To say I’m heartbroken and disgusted is an understatement. To ask me to stay and accept it is absolutely insane. The mentality of a narcissist. I will no longer lie to the public or pretend that this is something it isn’t. I choose me, I choose my happiness and health and my respect.”

In response, Ne-Yo released a statement via Twitter that read, “For the sake of our children, my family and I will work through our challenges behind closed doors.” He added, “Personal matters are not meant to be addressed and dissected in public forums. I simply ask that you please respect me and my family’s privacy at this time.”