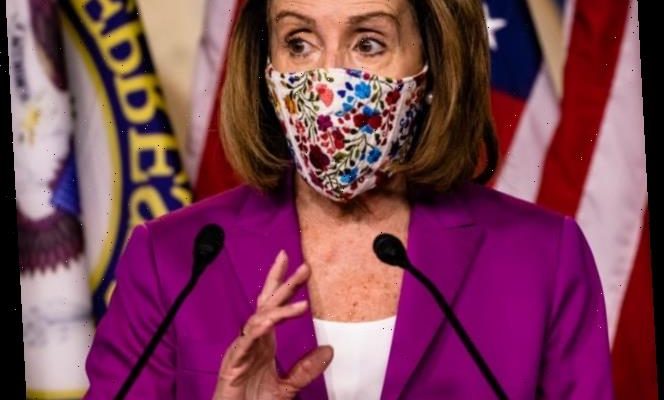 Nancy Pelosi has upped the ante.

Two days after the stunning assault against Democracy and the U.S. Capitol, one of the women right at the center of the mayhem has issued both a challenge and a threat to President Donald Trump.

Late on Friday, the long-time Congresswoman spoke on behalf of her caucus and said the following:

This, of course, is a referrence to what transpired around 2 p.m. EST on Wednesday.

At that time, a few hours after receiving their marching orders from President Trump, thousands of Republicans committed an act of domestic terrorism when they stormed the Capitol.

They prompted a complete lockdown of the building and infiltrated both the Congressional Chamber and the offices of various lawmakers.

One of the most memorable and troubling photos from the insurrection features a man — who has since been arrested — with his feet on Speaker Pelosi’s desk.

Five people, including a police offiicer, were also killed in the display of violence and sedition.

Donald Trump has since responded by calling the instigators “Patriots,” while Facebook has responded by banning Trump from its platform.

“It is the hope of Members that the President will immediately resign,” continued Pelosi.

“But if he does not, I have instructed the Rules Committee to be prepared to move forward with Congressman Jamie Raskin’s 25th Amendment legislation and a motion for impeachment.

“Accordingly, the House will preserve every option — including the 25th Amendment, a motion to impeach or a privileged resolution for impeachment.

“With great respect, our deliberations will continue.”

There have been calls to remove Trump from office via the 25th Amendment by numerous officials and politicians.

Even The Wall Street Journal, which is owned by Rupert Murdoch, has called on Trump to resign.

This seems unlikely to happen, though.

The latest draft of the impeachment resolution, obtained by CNN, includes one article of impeachment for “incitement of insurrection.”

Pelosi will consult with President-Elect Joe Biden before making any final decisions.

Trump, of course, was impeached in early 2020, but the Senate voted to acquit the President at the time.

Would they do so again, considering a successful impeachment calls for a two-thirds majority of the Senate?

Probably, although Mitt Romney and Lisa Murkowski would almost definitely vote to convict Trump, while 2024 Presidential hopefuls such as Ted Cruz and Josh Hawley may do the same in order to ensure Trump cannot run again.

No matter what legislation is passed or what resolutions get voted on, Trump WILL leave office on January 20 when Biden gets sworn in as President.

Along these lines, Bernie Sanders Tweeted on Friday:

“Some people ask: Why would you impeach and convict a president who has only a few days left in office?

“It must be made clear that no president, now or in the future, can lead an insurrection against the U.S. government.”

We still can’t believe this has to now be spelled out.

But, hey, at least the corporate tax rate is lower now than it was under Barack Obama!

“After close review of recent Tweets from the @realDonaldTrump account and the context around them we have permanently suspended the account due to the risk of further incitement of violence,” Twitter’s official Safety account wrote on Friday evening.