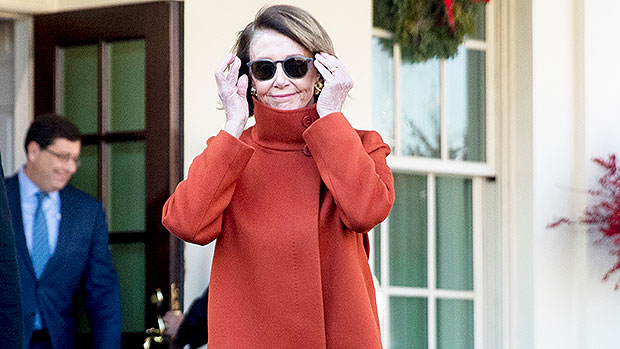 Nancy Pelosi confronted Donald Trump, who said he’d ‘proudly’ shut down the government unless his proposed border wall is funded, and voters thanked Nancy for standing up the president!

In what is being called a “temper tantrum” of epic proportions, President Donald Trump, 72, got into a squabble with Democratic leaders Rep. Nancy Pelosi, 78, and Sen. Chuck Schumer, 68, in the Oval Office on Dec. 11. The gist of the argument, which Splinter aptly described as a vision of “Hell,” was over the looming federal government shutdown crisis. Trump has threatened to shut down the government unless he gets billions to fund his Mexican border wall. Following this face-to-face, voters praised Nancy for confronting the president.

“Nancy Pelosi is a baller and don’t tell me anything otherwise,” @Aswinn tweeted. “I’m rewatching the meeting between Trump, Schumer & Pelosi. Nancy Pelosi literally clapped back at President Trump when Trump suggested she couldn’t speak candidly. She reminded Trump that Dems will control the House,” @Yamiche said. “Today, with the masterful help of @NancyPelosi and @SenSchumer, the whole world got to see what a bumbling amateur @realDonaldTrump is,” said @AndyLassner. Many also raved over how she looked as she exited the meeting, putting on sunglasses truly like the “badass” many think she is.

So, how did Nancy “own” the president? Keep in mind that Congress is in its lame duck session, as all the Dems who were elected in the 2018 Midterms have yet to be sworn in. The Republicans still have control of the House, and Nancy seemingly taunted the president with that fact. “You have the White House. You have the Senate. You have the House of Representatives. You have the votes. You should pass [the border wall funding],” she said, per Washington Post. When Trump said that he knows he needs 60 votes in the Senate to pass the spending bill, Nancy said he could start the process in the house. “The House we could get passed very easily, and we do,” he said.

“When the president brags that he won North Dakota and Indiana, he’s in real trouble,” Chuck snapped back. Following the meeting, he spoke with reporters and said that this “Trump shutdown, this temper tantrum that he seems to throw, will not get him his wall and will hurt a lot of people.”

Our elected officials have until Dec. 21 to work things out, or the federal government will run out of money. A lot of people will be furloughed ahead of the holidays and a lot of governmental services will be interrupted at a crucial time of year. This looming reality doesn’t seem to concern Trump. “I am proud to shut down the government for border security,” he said during the meeting. “If we don’t get what we want, one way or the other … I will shut down the government, absolutely.”