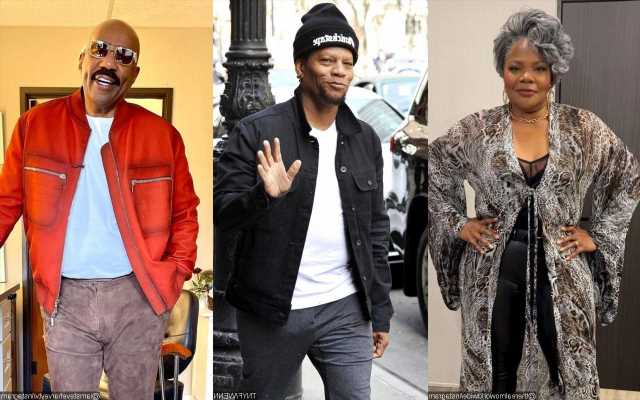 Taking to her Instagram account, the ‘Almost Christmas’ actress further slams the comedian in a new video, which also features her husband, amid contract dispute.

AceShowbiz –Mo’Nique and D.L. Hughley‘s back-and-forth over alleged contract dispute has yet to end. Taking to her Instagram account, Mo’Nique further elaborated the matter in a new video that also featured her husband, Sidney Hicks.

In the clip, which she shared on Wednesday, June 1, Mo’Nique revealed that she wasn’t going to address Hughley’s comments on her during an interview or some sit-down. “The night that I spoke about D.L. Hughley, I wanted D.L. Hughley to be there,” she said, adding that Hughley and Steve Harvey sat down together for a radio interview and “lied.”

Mo’Nique also explained that her mission over the weekend was to get back at Hughley for the negativity. She additionally shut down Hughley’s claim that several audience members were disappointed with her display.

Fans quickly showed support for the comedienne in the comment section. “I stand with Mo!!! I love how you love you! AND how ya hubby got ya six no matter what!” one person wrote. “No need to step down from your throne queen you are powerful.”

The feud between Mo’Nique and Hughley started after the actress claimed that she, instead of D.L., was booked as a headliner for a show in Detroit. During her set at the Comedy Explosion, she slammed Hughley, “That’s what the motherf**king contract says…Mo’Nique is to be the last motherf**king person on the got damn stage. She is the headliner. That’s what I signed the contract for,” she told the crowd.

In response to that, Hughley wrote on Instagram that Mo’Nique was “the problem.” In a Sunday, May 29 post along with a picture of the Oscar-winning actress, he wrote, “All you have to do is check the order of names on the ticket stub from last night and you’ll see who’s confused. Against my better judgment, over the objections of my team and 4 other occasions where I said NO, I decided to take a chance and work with Monique.”