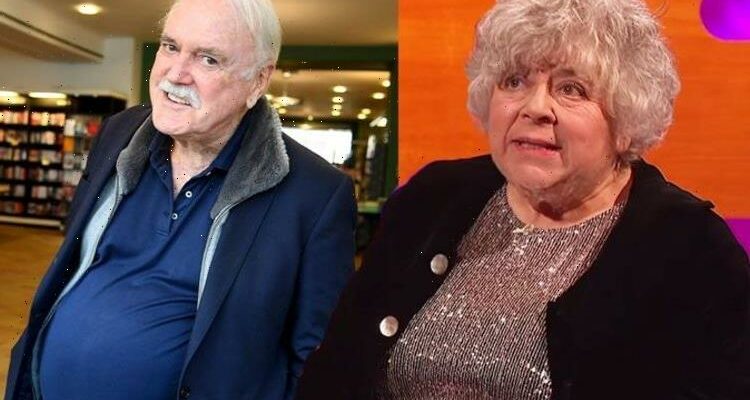 This Morning – Miriam Margoyles shows off her knee scar

Miriam Margoyles, 80, spent three years at Cambridge University in her 20s, where she began acting and appeared in productions by the Cambridge Footlights. It was there she first met John Cleese, 81, Bill Oddie, 80, and the late Graham Chapman, who went on to form Monty Python.

Miriam has now spoken on her experience of working alongside the famous men while staring in the Footlights revue of 1962 and claimed they “didn’t like” her and treated her “viciously”.

She shared: “The three years I spent at Cambridge gave me everything I have. That was a time when I was fully alive, when I fully became myself. But I lost my smile a little when I performed in the Footlights.

“When I say ‘they’, I refer to a most distinguished group: John Cleese, Graham Chapman, Bill Oddie, Humphrey Barclay (later Head of Comedy at LWT), Tony Hendra and Tim Brooke-Taylor.

“The only girl in the show, I was a pert little madam and thought I was as good as they were — and they didn’t,” she added in an extract from her new memoir shared by the MailOnline.

Miriam says she “admired” the later creation of Monty Python and The Goodies but the men were geniuses “not gentlemen”.

She continued: “If you think about it, the Monty Python shows didn’t feature funny women, only the occasional dolly bird. And I certainly wasn’t that.”

The Harry Potter actress divulged how during the entire run of the revue directed by Trevor Nunn she would “weep in her bedroom” at Newnham College, after being treated as if she was “invisible” by the men.

Miriam added: “The treatment I received from those Footlights boys was diminishing, pointed and vicious. On reflection, it is they who diminished themselves.

“John Cleese, Bill Oddie and Graham Chapman were total s***s — and they have never apologised. The only one who did was the late Tim Brooke-Taylor.”

Despite this happening 60 years ago, Miriam says she has not forgotten and is “thankful” their paths have rarely crossed over the years.

Express.co.uk has contacted John Cleese and Bill Oddie for comment.

Humphrey Barclay’s rep told Express.co.uk there was “no comment” on this matter.

John is best known for his role as Basil Fawlty in slapstick comedy Fawlty Towers, while Bill now works for the BBC hosting wildlife shows including Springwatch.

Graham, who worked with John in the Monty Python troupe, died in 1989 after tonsil cancer spread to his spine.

Miriam’s first major role in a film was as Elephant Ethel in Stand Up, Virgin Soldiers (1977).

In the 1980s, she made appearances in Blackadder opposite Rowan Atkinson.

She shot to international stardom after playing Professor Sprout in Harry Potter and the Chamber of Secrets, released in 2002.

In a 2011 interview on The Graham Norton Show, in regard to her fellow cast members, the actress claimed that she liked Dame Maggie Smith, but rather bluntly admitted that she, “didn’t like the one that died”, meaning Richard Harris.

The Real Marigold Hotel star is openly gay and is in a relationship with Professor Heather Sutherland.

The couple split their time between New South Wales and the UK.