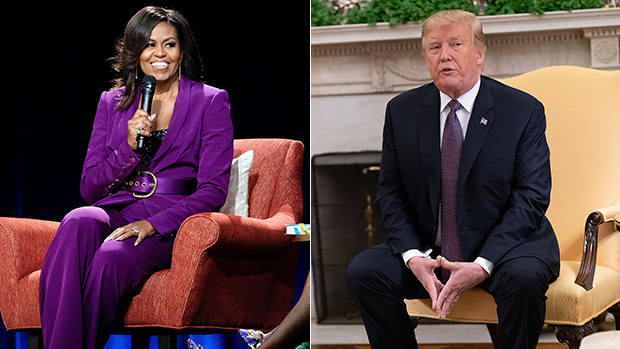 Michelle Obama appeared to subtly diss Donald Trump by claiming that just because someone had a good TV show, it doesn’t mean they’d make a great president.

Michelle Obama has the best way of throwing such subtle shade without actually throwing anyone under the bus by name. The former first lady appeared at the State Farm Arena in Atlanta, Georgia, on May 11 for a 90 minute Q&A about her memoir Becoming. Host Gayle King asked Michelle if she would consider running for president, like many people thought the CBS This Morning host’s BFF Oprah Winfrey would do after a rousing 2018 Golden Globes speech that sounded incredibly presidential. Michelle said that just because someone has had a TV show, it doesn’t qualify them for the Oval Office. While she seemed to be talking about Oprah, many took it as a jab at President Donald Trump, who presided over NBC’s The Apprentice as seen in video here from the event.

Michelle, 55, has said many times over that she has absolutely no desire to return to the White House. She told Gayle that politics needs to really be in someone’s blood to want to be POTUS, and for Oprah as well as herself, that’s not the case. “Here’s the thing: People have to want to be in politics,” she said. “It has to be their passion. It’s not just because y’all like them. Like Oprah, she’s nice, she’s got a great TV show, so she should be president. That’s not how it works. We did that.” which got a big laugh out of the audience who seemed to think she was dissing Trump and The Apprentice.

“Being president is hard and it’s dangerous because there are no easy answers to any of this stuff,” she explained. “It requires intelligence and it requires understanding history,” she continued and after mentioning intelligence, the audience again erupted in noticeable laughter. It was so much that Michelle has to tell everyone “Look look look, don’t turn this into shade.”

She continued, “You’ve got to have the temperament and patience. As a mother what you do not understand, if you’re asking me to run, is the toll it takes on the people around the president. It is a heavy ask. My children are graceful, wonderful, and they are champions to have made it through eight years alive on the other end of this. I am grateful.”