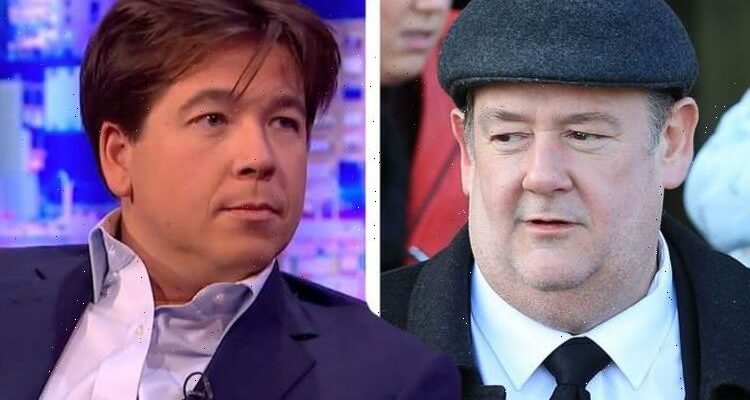 Michael McIntyre, 45, winced as he looked back on his first ever late night TV panel appearance on 8 Out of 10 Cats, where he was “humiliated” and then targeted by fellow comedian Johnny Vegas. The Benidorm star ridiculed his camp accent while asking him who he was, as Michael was new to the comedy scene.

I felt like some kind of a freak. I hated every second

Speaking of his early career in his latest column for the Mail Online, his debut on the show in 2015 stood out like a sore thumb.

Still to this day, the experience has left him pretty “shaken”, as Johnny’s words continue to ring loud and clear in his ears.

He appeared alongside other guests Ulrika Jonsson and Channel 4 newsreader Krishnan Guru-Murthy alongside the regular hosts Jimmy Carr and the late Sean Lock.

His big break had come just weeks before at the Royal Variety show and as this was his second TV gig, he recalled a small ripple of polite applause as he walked on-set.

“For the first 15 minutes I was in essence an audience member, laughing with everyone else,” he wrote.

“But in truth I was in shock and awe at how quick-witted the other comics were.

“They had jokes prepared and were riffing and bantering hilariously.”

He went on to remember his “humiliation” that he was the only one not getting any laughs: “When Ulrika got a big laugh and then Krishnan Guru-Murthy an even bigger one, I realised I was being humiliated.”

“And just when I thought things couldn’t get any worse, Johnny Vegas turned his attention to me.”

Michael explained a typical comedian’s technique, revealing that they would “scan everyone and everything” for potential laughs.

“Johnny Vegas, despite his haphazard persona, has a brilliant comedy mind, as I unfortunately discovered when I found myself and, in particular, my pink shirt, in his crosshairs,” Michael sighed.

“I don’t recall what I said back but the sound of my posh, camp voice sent him into a frenzy of ridicule, like I was in the front row of one of his gigs rather than an equal on a comedy panel show.”

He admitted at the time he just “sat there with an inane grin and took it”.

“I felt like some kind of a freak. I hated every second,” he shuddered.

The funnyman went on reveal that host Jimmy had “very kindly” phoned him that night to see if he was doing OK and to reassure him that the show would be edited to look good.

“Jimmy was right. The show looked fine when it went out,” Michael said.

“I was quiet but had a few lines that were bolstered by added laughs… laughs borrowed from somebody else who was actually funny.

“All of Johnny Vegas’ cutting remarks were on the cutting-room floor, as if they never happened.

“But they did happen, and I was shaken by the experience.”