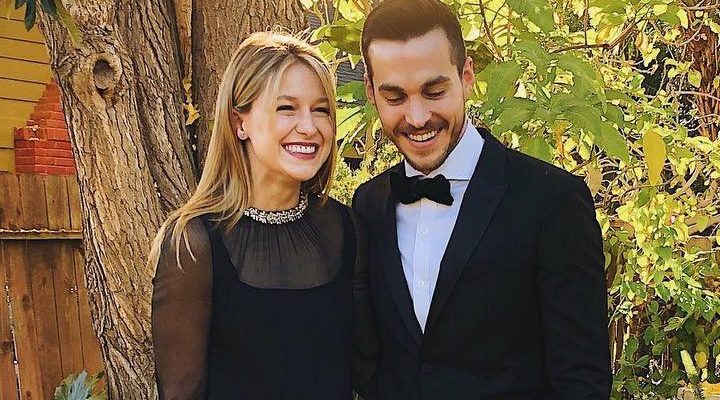 AceShowbiz -Congratulations are in order for “Supergirl” stars Melissa Benoist and Chris Wood! The stars, who play couple on The CW’s DC series, take to Instagram to share the “happiest” news, that they are engaged now.

The Kara Danvers depictor shared on Sunday, February 10 on her Instagram accout a photo of her smiling beautifully at the camera while her now-fiance kissed her on her cheek. “yes yes yes it will always be yes,” so she wrote in the caption.

In addition to the sweet PDA, the snap featured her flaunting her enormous engagement ring from Chris. Chris, who plays Kara’s love interest Mon-El, also shared the same snap on his own account, writing, “The happiest,” in the caption.

The 30-year-old also teased that their wedding would be coming “soon.” Alongside a photo of them together being so blissful in matching black outfits, Chris wrote, “not from our wedding BUT IT WILL BE SOON.”

The pair turned off their comment on Instagram but it could be seen that their fellow The CW stars were showing their support for the newly-engaged couple. Ruby Rose, who plays Batwoman on this year’s Arrowverse crossover event, and “The Flash” star Grant Gustin liked their engagement posts.

Melissa and Chris sparked romance rumors back in March 2017 when they were caught making out on the beach during a trip to Cancun, Mexico. They were seen kissing “passionately several times,” and “appeared to be in their own world,” according to an onlooker. “They didn’t appear to care who watched their passionate embraces.”

Additionally, the sweet couple also had matching back swimsuits during the romantic getaway.

Prior to this, Melissa was married to her “Glee” co-star Blake Jenner. They tied the knot in 2013 before splitting due to “irreconcible differences” in 2016. “The distance was an issue, things weren’t working,” a source said of split at the time. “It’s amicable and mutual,” the source added. Their divorce was finalized in December 2017.