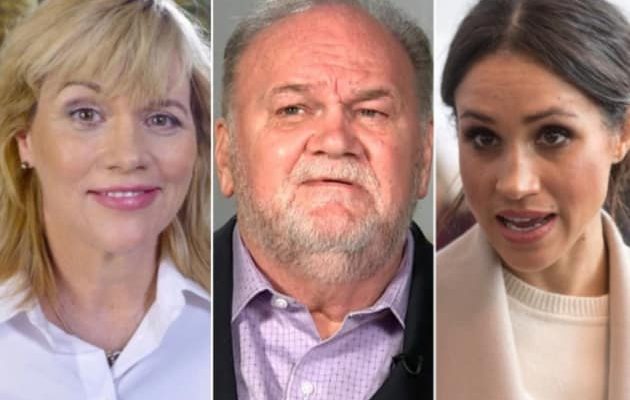 As you very likely know by now, Meghan Markle is getting set to welcome a new member of her family.

Indeed, the Duchess of Sussex is pregnant!

Unfortunately, Markle’s expecting state does not mean she is finished dealing with old members of her family.

In fact, she’ll likely be stuck hearing from them even more over the next few months as they angle to meet their future young relative.

We’re talking, of course, about Thomas Markle and Samantha Markle.

The former is Meghan’s father, from whom she is mostly estranged and who lives in Mexico.

Thomas missed his daughter’s wedding in May due to a heart condition and his involvement in a paparazzi photo scandal and has since ratcheted up his criticism of Meghan, saying she is ungrateful for his influence in her life and complaining (already) that he will never meet his grandchild.

Samantha Markle, meanwhile, is Meghan’s half-sister and she is totally estranged from Meghan.

She is 17 years older than the Duchess; was not raised in the same household as her partial sibling; and barely knows Meghan at all.

But she has still jumped on every media platform available over the past several months to bash the heck out of Markle every chance she gets.

In light of Meghan and Harry’s major pregnancy news, however, both Thomas and Samantha has struck a more calm and rational tone.

“It just makes everything that happened over the last year disappear,” Samantha said to The Sun this week of the baby bombshell, adding:

“I want Meghan to be happy… and have peace. Everybody needs to be positive.”

Naturally, of course, Samantha did manage to get a dig at her half-sister in there as well.

“I would hope that – for the sake of the baby, the family, the world and my dad — that leaving him out of the statement was not intentional,” she continued.

“I hope my dad is included and at a proper time. If he is excluded, I won’t be happy. It is in the best interests of the baby for my dad to be included.”

The statement announcing Markle’s pregnancy was short and simple and didn’t mention any relatives at all.

It simply read as follows:

Their Royal Highnesses have appreciated all of the support they have received from people around the world since their wedding in May and are delighted to be able to share this happy news with the public.

In conclusion, Samantha really hammered home the point of how the unnamed child ought to have its grandfather in its life:

“A baby changes everything and softens everyone. I would only hope that there would be some adjustment or some way of including him.”

But a source close to the grandparent-to-be also spoke to The Sun and praised Meghan while simultaneously angling to, yes, be part of the kid’s life.

“He heard the news before it was made public and was overjoyed. He thinks Meghan will make a great mum as she is already so maternal. Thomas sees this as a chance to fix the problems between him, Meghan and Harry.

“He is desperate to be there for his grandchild and wants to play an active role in their life.”

Meghan Markle Baby Bump Watch: Is She Showing Yet?


Will Meghan let these awful human beings into her life again?

Into her son or daughter’s life again?

Will this ongoing scandal bring down the Royal Family?

Meghan’s life is about to get far more cute and far more ugly at the same time.