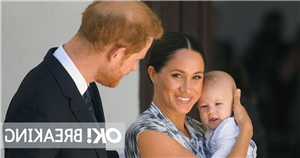 Meghan Markle has shared the terrifying story of how son Archie's room caught fire during naptime.

The Duchess of Sussex told the story on her new podcast "Archetypes," a series for Spotify which will deconstruct the history of societal stereotypes about women.

In the episode, she recounts how her son Archie narrowly escaped a fire in his bedroom where he was supposed to be sleeping during the Sussexes’ tour of South Africa.

Archie’s then nanny, named only as Lauren, had taken the four and a half month old with her downstairs instead while she went to get a snack when, meanwhile, the heater in the nursery caught fire.

Meghan said: “In that amount of time that she went downstairs, the heater in the nursery caught on fire. There was no smoke detector. Someone happened to just smell smoke down the hallway, went in, fire extinguished. He was supposed to be sleeping in there.”

The former Suits star told how they had dropped their young son at the housing unit they were staying in for a sleep straight after arriving on their official tour, with Meghan and the Duke of Sussex leaving to carry out a visit to the Nyanga township, where the Duchess delivered a speech.

“There was this moment where I’m standing on a tree stump and I’m giving this speech to women and girls, and we finish the engagement, we get in the car and they say there’s been a fire at the residence. What? There’s been a fire in the baby’s room,” she said.

Meghan added: “We came back. And, of course, as a mother, you go, ‘Oh, my God, what?’ Everyone’s in tears, everyone’s shaken. And what do we have to do? Go out and do another official engagement? I said, ‘This doesn’t make any sense’.”

The new podcast, which is a co-production between Archewell Audio, Gimlet and Spotify, launched on the streaming service on Tuesday with its first episode 'The Misconception of Ambition with Serena Williams'.

The blurb in the episode notes said: "Meghan talks to the one and only Serena Williams about the double standard women face when they are labelled 'ambitious' and the ripple effects this has on other aspects of their lives".

"This groundbreaking premiere episode also features Dr. Laura Kray, a leading expert on gender in the workplace," it reads.

Meghan, The Duchess of Sussex, was listed as the Executive Producer of the podcast.

For the latest showbiz reports and breaking news visit OK!

Check out all the latest hot topics on OK! magazine’s news section and discover exclusive celebrity news about your favourite soap actors and reality stars.

We're also on Facebook.com/okmagazineuk – for the latest online celebrity news, features, galleries and videos throughout the day from your favourite site.