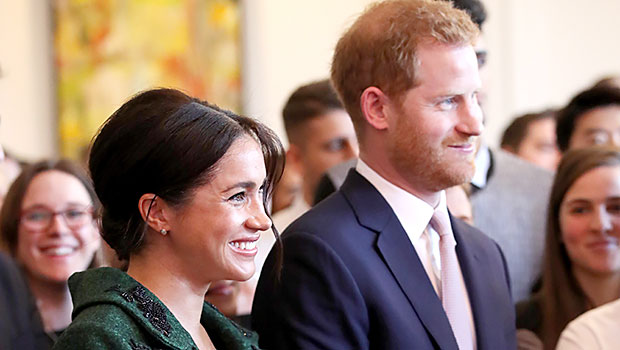 Even before the birth of her baby, Meghan Markle proved to be one very protective mother. Just look at how she sweetly cradled her growing pregnancy bump in London on March 11.

Mom-to-be Meghan Markle, 37, was absolutely glowing when she stepped out with her husband, Prince Harry, 34, for Commonwealth Day 2019. The duo kicked off their day with a visit to Canada House in London, and everyone took notice of how the Duchess couldn’t help but protectively pat her baby bump as she entered the venue. Photographers caught the adorable moment on camera, and Meghan flashed a big smile as she placed her hand on her belly. Despite looking like she was about to pop, Meghan was in bright spirits for the annual affair. Equally as protective as the Duchess was her hubby Harry, who appeared to be right at her side through the entire day.

Meghan’s pregnancy fashion looks have been nothing short of amazing, and her Commonwealth Day appearance was no different. The Duchess reached for an emerald-colored coat from Erdem that featured black, floral beaded embellishment for the outing. The look also featured one hefty price tag. The entire ensemble is estimated to have cost around £8,000 or $9,000 USD by celebrity stylist Lucas Armitage. Additionally, the royal carried a small black clutch in her hand, and added a simple yet sleek pair of Aquazzura pumps to her ensemble. The Duchess impressively managed to rock the four-inch heels despite being eight months pregnant. Then, once inside the venue, Meghan unbuttoned her coat, revealing a stunning green dress of the same hue underneath. If Meghan’s baby is instilled with her impeccable style sense, he or she will be one fashion-forward tot, that’s for sure.

Meghan and Harry may be leaving their baby’s gender a surprise, but it won’t be a secret for much longer. We DO know that the Duchess is about eight months pregnant, so we’ll be seeing a royal little one in no time! Meghan even dropped a major hint to fans on March 5, while candidly chatting with Welsh Secretary Alun Cairns. When he asked how Meghan was doing, she promptly replied, “No, it’s actually very sweet. It’s a very sweet, nurturing thing to ask,” she said. “We’re nearly there!”

Meghan looks overjoyed to be a mommy-to-be, and something tells us that she’s going to be the best parent ever when her little one finally arrives.