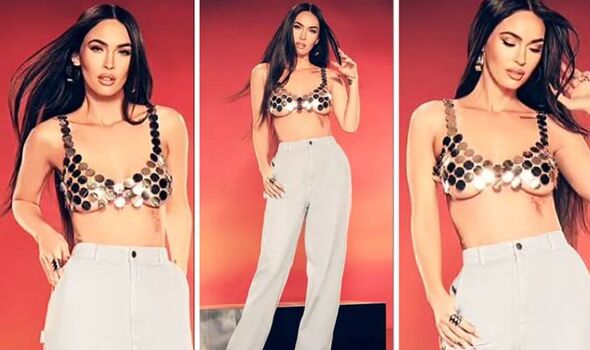 Megan Fox put on a busty display in the metallic bra

Megan Fox stunned as she modelled her new collection

Megan Fox has stunned as she almost spilled out of a tiny gold bra which features in her new Boohoo range. The Hollywood actress, 36, posed professionally as she modelled the collection which featured a range of outfits from everything including a metallic gold bra to a coordinated orange suit.

The star was on full form as she struck a series of poses while modelling the new clothes.

Megan wore her long tresses in a straight, sleek fashion which fell down her back and across her shoulders.

She wore a full face of glamorous makeup for the shoot, including a heavily lined pink lip and sharply bronzed cheekbones.

Her collection features a diverse range of items, including a beige pair of fitted trousers which she had paired with a gold, squinned bra,.

Composed of a series of metallic discs, Megan risked flashing more than she had bargained for as she almost spilled out of the number.

A matching mini dress was also included in the range which had been paired with gold stilettos.

The actress, 36, risked a wardrobe malfunction in the gold number

Megan Fox shared a number of the photoshoot snaps on Instagram