According to his family, the actor, best known for his Oscar-winning performance as gay prisoner Luis Molina in 1985’s ‘Kiss of the Spider Woman’, ‘died peacefully among family.’

AceShowbiz -Oscar-winning actor William Hurt has sadly passed away. The actor, who was best known for his Oscar-winning performance as gay prisoner Luis Molina in 1985’s “Kiss of the Spider Woman”, died of natural causes at the age of 71.

Announcing William’s passing was his son, Will. “It is with great sadness that the Hurt family mourns the passing of William Hurt, beloved father and Oscar winning actor, on March 13, 2022, one week before his 72nd birthday,” Will wrote in a statement. “He died peacefully, among family, of natural causes. The family requests privacy at this time.”

Upon learning of the heartbreaking news, Mark Ruffalo penned a tribute on social media. “Wow, another Major loss to the acting community. Great actor. Great mind. RIP,” he tweeted. In the meantime, Antonio Banderas posted William’s photo on Twitter with a caption that read, “A great actor has left us. RIP William Hurt.” 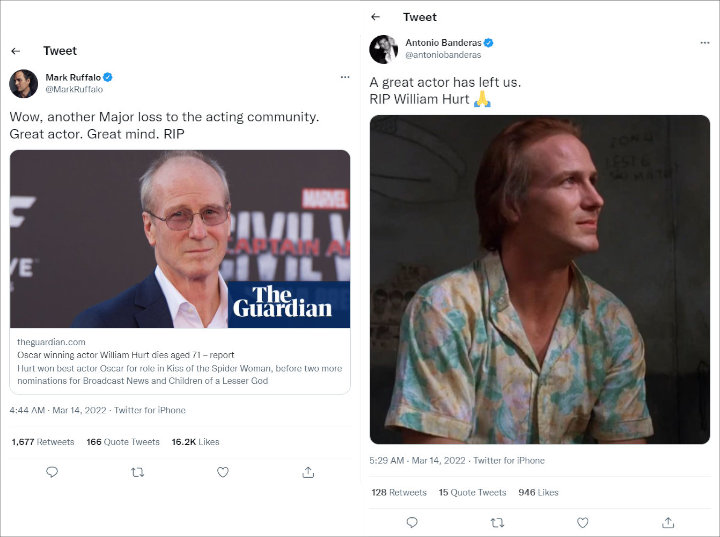 Matthew Modine mourned William’s passing as well. “I had the great pleasure of working beside William Hurt in ‘Too Big To Fail‘,” he penned via Twitter. “Bill was a consummate professional. Continually searching for greater truth and human understanding. Blessings to his family and friends. RIP.”

Also taking to social media to send condolences was Russell Crowe. “William Hurt has passed. On ‘Robin Hood‘, I was aware of his reputation for asking character based questions, so I had compiled a file on the life of William Marshall,” wrote the “Gladiator” star. “He sought me out when he arrived on set. I handed him the stack. Not sure if I’ve ever seen a bigger smile. RIP.”

William began acting on stage in the 1970s before making his big-screen breakthrough as an obsessed scientist in “Altered States“, which earned him a best newcomer nomination at the Golden Globes in 1981. Then in 1985, he won an Oscar for his performance in “Kiss of the Spider Woman”.

In the following years, William, who revealed that he was diagnosed with terminal prostate cancer in 2018, received more Oscar nominations for his work in the 1986 romance film “Children of a Lesser God” and in the hit 1987 comedy “Broadcast News”. He was also nominated for his performance in David Cronenberg’s “A History of Violence” in 2006.