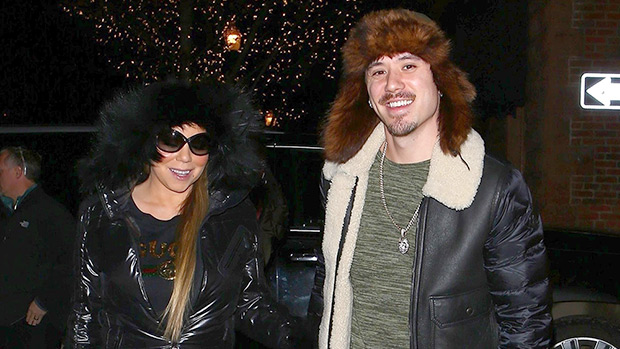 Mariah Carey is skiing her way into the holiday in style! The singer rocked a tight, black jacket while out on a date in Aspen with boyfriend, Bryan Tanaka! And, wait until you see her boots! Check out her full look!

Mariah Carey turned the snowy sidewalks of Aspen into her very own runway while out with Bryan Tanaka! The singer, 48, who was dressed in all black, and her dancer boyfriend walked hand-in-hand after a stop at Louis Vuitton on December 23. Afterward, the couple took in a movie — the new Disney film, Mary Poppins Returns, starring Emily Blunt as Poppins. But, it was Mariah who stole the show!

She looked stunning in black pants and a matching Gucci shirt. Mariah wore black boots with fur trimming, and matching sunglasses. Our favorite part of her wintery look? — Her tight, sleek, black jacket! The cool piece had an oversized fur hood, as well as fur on its sleeves. Meanwhile, Tanaka wore a fuzzy, brown hat with a leather jacket that had light, sheep-like fur trimming.

And, the couple isn’t alone on their Christmas vacation! Mariah’s ex, Nick Cannon, 38, is also in Aspen, along with their 7-year-old twins, Moroccan and Monroe. Cannon took to Instagram on Monday to share a photo Monroe took when he was snoozing by the Christmas tree. “When your daughter catches the rare occasion of you sleeping!” he captioned his picture. “Daddy, I thought you don’t ever sleep?’ #MissMonroe.”

Mariah Carey and Bryan Tanaka in Aspen, Colorado on December 23, 2018.

Mariah posted a series of family photos while on their trip. She shared snaps of her and the kids hitting the Buttermilk ski slopes on December 22, despite her admission that she was feeling under the weather. “Shutting down the slopes with demkids [emojis] Keeping it festive despite my lingering cold,” the singer captioned a photo of herself dressed in a full Gucci look alongside her son.

Mariah’s been getting in the Christmas spirit for weeks. She shared an adorable video of her twins jamming out to her hit, “All I Want For Christmas Is You” at the beginning of December. “Roc & Roe have been practicing the background vocals to ‘All I Want For Christmas Is You,’ we’re gonna take this one step at a time— we’re very excited about it! It’s our first video doing this! It’s festive, Cmon!!” Mariah wrote alongside the video on Twitter. She also posted a cute photo of her twins writing letters to Santa.

Christmas is a special time for Mariah and her family. In fact, it’s the one holiday she tends to splurge the most on! “I should have a Christmas budget,” she said during an interview with SiriusXM’s Heart & Soul channel in November. “People don’t realize how much it costs to go and do the whole Christmas experience, the extravaganza that I do, darling.”