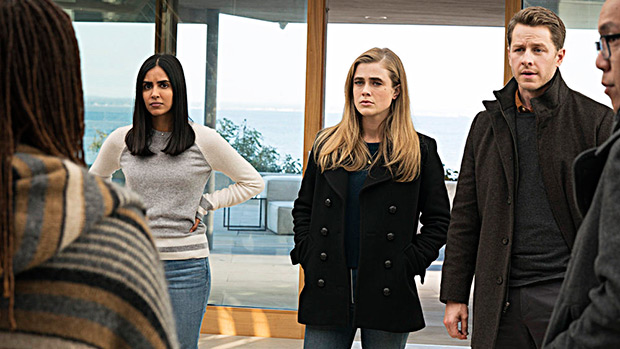 Jared and Michaela shippers, this one is for you! The exes finally discuss their feelings, and things get real on the ‘Manifest’ midseason premiere. Read our recap for the juicy details!

Welcome back to Manifest, the weirdest show on television. And that includes the one where the dragon lady has sex with her nephew, and the one where kids have to battle a monster from Dungeons and Dragons. We’re all caught up with where we left off, thanks to Michaela giving a very ham-fisted and thorough recap of the entire series while crying by her mom’s grave. “The government thinks we’re criminals. Some people think we’re angels, or saints, mom.”

In case you forgot, Grace (rightfully) kicked Ben out after he almost got himself and Cal killed in the explosion. Now, he and Michaela are living together in an apartment that looked pretty much like the Pepe Silvia scene from It’s Always Sunny. Ben, the harbinger of great ideas, decides to go to Vance’s memorial service where he (also rightly) gets kicked out by NSA agents. He gets stopped by a podcaster named Aaron Glover who runs “828-Gate”. Ben’s not having it.

Meanwhile, Saanvi and Fiona are caring for the patients who escaped from the lab. They’re catatonic, and now, they all jerk their heads at the same time. Michaela has her first cheesy vision! When she touches one of the patients, Paul, she gets transported into a blizzard while a spooky voice says, “find her!” And like that, Paul wakes up. But, he has no memory of his past life, or his wife, Helen. Turns out that nobody can find Helen to begin with. Michaela and Jared (still hot) head to their home in Queens to investigate and it’s deserted. From the looks of it, she bounced right after 828 landed. They track her down to a shifty hotel where she’s holed up with a handgun because Paul was an abusive a-hole. Whoops!

Ben has decided to trust Aaron, because he trusts everyone, and now they’re working together to take down the Man. Or, rather, the woman. They’re searching for a mysterious woman called The Major, who was reportedly at the explosion an hour before it went down. And she’s searching for something called the Holy Grail. Now, Ben has Powell, Vance’s #2 in command, on his side. After all, it’s what Vance would have wanted. God, the NSA needs better agents.

Now…what you’ve all been waiting for: Jared and Michaela HAVE SEX. It’s more nuanced than that, but still. It all goes down when Michaela tells him that she’s filing to get reassigned at work, because she “doesn’t want to be a wrecking ball messing up your life.” Jared shouts out that she’s his soulmate, that it’s “always been you,” and that every morning he wakes up thinking he’ll see her sleeping next to him. That’s why he didn’t come to the hangar when 828 landed. They instantly hop into bed together. Kind of sucks to be Lourdes, doesn’t it?

Oh, and by the way… the calling wasn’t telling her to find Helen. The voice in Michaela’s head isn’t her own anymore. She’s having someone else’s vision — Cal’s. We flash to him jolting awake in bed after having a vision of himself carrying a photo of Michaela through the snow. The Major is coming.