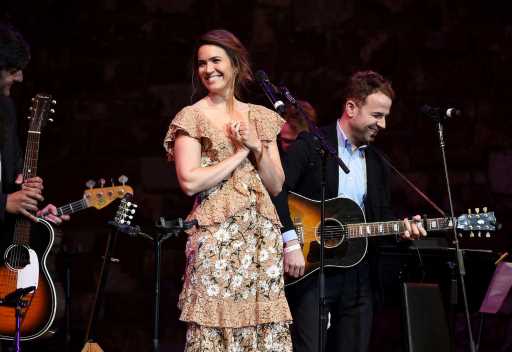 Anyone braving the standstill of Los Angeles rush-hour traffic last night to the John Anson Ford Amphitheatre would have found that they arrived to a tranquil and emotional oasis as Fox and NBC celebrated the music of This Is Us with performances by Mandy Moore and composer Siddhartha Khosla.

Moore took the mic before the 1,200 packed venue to sing “Invisible Ink,” a track her character Rebecca auditions with at an L.A. recording studio in the November 13 episode “Sometimes.”

Moore was joined onstage by Taylor Goldsmith, her husband, who co-wrote “Invisible Ink” with Khosla. In the episode, Moore sings “Invisible Ink” a capella to boyfriend Jack (Milo Ventimiglia) in the car. She has just left her audition, a bit down in the dumps, when Jack asks to hear the song.  As she sings, Jack melts into a puddle of tears, remembering his days in the Vietnam War.

When Ventimiglia shot that scene, he said he broke down in the first take.

“She gave me permission to break,” said Ventimiglia about working with his scene partner at last night’s cast Q&A following the musical performance. What made him cry? “It was the words [to the song],” said the actor. “Jack went to war, lost his brother in war, saw things that only a soldier on a battlefield sees, but has to package up and bring that home….The loss takes him over.”

This Is Us creator Dan Fogelman kept mum on Season 4 details last night, simply saying, “We’re really excited. It’s been our first couple weeks back in the writers’ room and I’ve already written the first episode of the season over break, and [co-showrunners] Isaac [Aptaker] and Elizabeth [Berger] are writing the second one right now.”

“It’s a really ambitious season,” he added. “We’re in the middle of these characters’ journeys and that’s a really exciting place to be. I can’t tell [you] much about the storyline, but I think the first episode… people will be talking about it. It’s different and unusual.”

Danglers from Season 3 include: Kevin Pearson (Justin Hartley) breaking up with his girlfriend Zoe over her not wanting kids, with a flash forward of him with a son. Beth (Susan Kelechi Watson) and Randall (Sterling K. Brown) move to Philadelphia as their marriage is crumbling. The story also isn’t finished in regards to Jack’s brother Nick (Griffin Dunne), who we see at the hospital with Randall and Rebecca (Moore). Also, from the flash forward, there’s a question whether Kate Pearson (Chrissy Metz) and Toby (Chris Sullivan) have split after having their baby.

In the middle of performances, Khosla shared how his musical career changed after being hired by his former college roommate Fogelman as the composer for This Is Us. Khosla literally wrote the music for the pilot in the basement of his parents’ New Jersey home. On a Skype call with the TV production staff, Khosla’s father could be seen walking around in the background in his T-shirt.