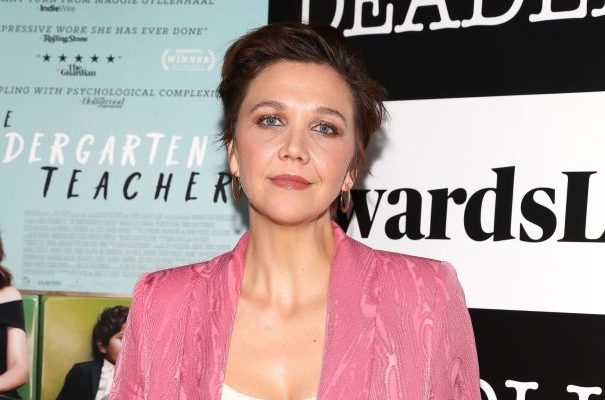 As with her previous work in projects like Secretary and The Honorable Woman, Maggie Gyllenhaal, doesn’t shy away from the raw underside of humanity in Netflix’s The Kindergarten Teacher. In the titular role of Lisa Spinelli, Gyllenhaal explores the downward spiral of a woman projecting her poetry ambitions onto an apparent child prodigy. It’s a dark and uncomfortable, but ultimately fascinating tale of the possible consequences of a personality shoehorned and silenced into the wrong existence, and one that Gyllenhaal depicts with her trademark depth and complexity.

“I’ve become more and more aware of the ways that none of us are fed in the ways that we need to be fed,” she says of her decision to do the Sara Colango-written and directed film.

Now about to head into Season 3 of HBO’s The Deuce, which she both produces and stars in as Eileen “Candy” Merrell–a sex worker with an artistic sideline directing porn–Gyllenhaal is also deep into adapting the Elena Ferrante novel The Lost Daughter into a film she plans to make her directorial debut.

Lisa’s unhinged behavior in The Kindergarten Teacher seems borne out of the frustration women have felt throughout history. Is that what drove you to play this role?

in so many ways my experience is different than hers. I feel like I’m fed artistically, intellectually and emotionally in a way that she isn’t. But there are ways that we wish that this was a problem of our mother’s generation, or our grandmother’s generation, and then we woke up and Donald Trump was elected after saying he could grab women’s pussies if he wanted to, and there was no consequence for it.

Even though there are a lot of differences between me and Lisa, I feel like there are also a whole lot of similarities, even though it’s scary to look at that, and it’s upsetting to look at that. I think that her experience of getting to a place where she’s like, “I actually can’t take this anymore,” is very much like the experience of many women who are actually our age and younger.

You’re planning to direct and you’re already a producer. Would you have liked to do that sooner?

Absolutely. I’m not proud of this, I wish this were different, but I didn’t feel entitled to direct, in a way that maybe 100 years ago, if you were a medical-minded woman you might set your sights on being a nurse. Even 20 years ago, when I was getting out of college I was like, “I’m going to be a storyteller. I’m going to be an actress.” But there wasn’t really…Of course, there were exceptions. There were incredible women filmmakers, but it didn’t seem like an obvious choice. It’s only recently that I really felt like it was something I could do.

Yeah, I do think it might have happened sooner. The producing, though, happened very naturally. I feel like I just got to a point where I was like, “I have a lot of ideas. The name for this is producing.” I think there actually are a lot more models of women producers than directors out there. Maybe that’s why it felt more natural.

What were the conversations like with Sara Colangelo in the beginning of this project? Was there a collaborative experience there?

There was a collaborative experience for sure but I’m not an actress who likes to do a lot of talking about intellectual ideas about the character I’m playing. I really try to avoid it. I think partially because it’s something I can fall very naturally into and I don’t think it serves my work. IThere were script changes I wanted to make. Little things. The script was excellent, really exquisite, beautifully written. I think in some ways Sara originally imagined that Lisa would look like a gray shadow of a woman when you first meet her. To me, I can see that, I can understand why someone would choose that, but I think it’s a much more interesting movie if she’s bright, curious, seems like someone who could be your friend and then falls off the deep end.

What we’re interested in exploring is what does it really look like when someone, when a woman, falls apart? Who is to blame? Where does it come from? Why does it happen? If you either do the, “Look, I’m going to know from the minute it starts that she’s going to fall apart so I’m not going to go that deep with her” or if you do the, “This is the sexy operatic version of a woman falling apart” I think it keeps the audience from really having to consider how close they are to collapse.

To be honest, I believe everyone falls apart sometimes. I believe that’s part of being alive. I don’t believe everyone kidnaps young children. That’s a very extreme example. I think it’s a really interesting dramatic experience to have to sit with someone who looks bright and lovely and watch that person in a very realistic way go to pieces. You know?

Is the child really a prodigy, or is it all in Lisa’s head?

I think the script is designed to say that this little boy is a poetic genius that she finds in her class, but the whole time in my private mind I kind of thought, “There’s a reading of this movie where she is creating all of it.” Five-year-olds say amazing things, poetic things all the time, and how you put a frame around it and what words you fill in that you didn’t quite hear and where you make a line break, that’s what makes a poem. From my objective view of things, I like the movie better when he’s not a genius, he’s just a little kid. She needs so badly some kind of artistic interaction, that kind of a meaningful connection, that she creates what she needs. Whereas Sara I think feels that he was a genius. We got to exist with those conflicting takes, but it makes for a cool movie.

The original 2014 Israeli film was directed by a man–Nadav Lapid. Have you seen it? It would be interesting to look at the contrast now.

I haven’t seen it, but what I’ve heard about it is that it’s very good, and that narratively it’s very, very similar, but thematically it’s totally different, and not really a feminist movie at all. That’s so interesting.

Were there any parallels for you between Candy from The Deuce and Lisa? These are two very different women but they’re both boxed into their lives in some ways.

Totally. I mean, I made the first season of The Deuce, then made The Kindergarten Teacher, then made the second season of The Deuce. In a way, they’re very tied for me. They’re both women who are waking up to the fact that they’ve been starved, and they have very different reactions to it. For both of them it’s life or death. It’s dire. I do think, though, that it was way more fun to play Candy than it was to play Lisa, even though Candy gets beat up and abused. It’s not easy for Candy. But her mind is working so clearly. Ultimately, it’s a pleasure. It was much harder to play Lisa who to live in a space, in the mind of somebody who is so confused, it hurts. It feels bad.

Any idea of the Season 3 trajectory?

One thing I do think, but I don’t know for sure, is things are really looking up for Candy in season two and just knowing [creators] David (Simon), George (Pelecanos), and their work, I just think season three might be more difficult for her. Maybe not. Maybe she’ll be the exception.

You acquired the rights to the Elena Ferrante novel The Lost Daughter. How’s that shaping up?

Well, the adaptation I’m almost finished with. I don’t know if you really call it a first draft anymore. I’ve had a couple of really helpful readers already and I’m almost there. It has been the greatest pleasure. I know that that’s not often the experience of writers. My mom is a screenwriter and growing up, I had watched my mother have to force herself to have a discipline to sit down and write, and that’s not my experience to be honest.

I did a lot of writing while doing days and days and days of press for The Kindergarten Teacher, which I really enjoyed. It’s such a different world than sitting alone with yourself and your mind and your fantasy of Elena Ferrante’s mind. Just slowly, carefully, thoughtfully working on something. I found it was kind of an antidote in a way to the getting dressed up and doing hair and makeup.

To be able to sit and move at my own pace and, like I said, either be in just my own mind or in this fantasy conversation with Elena Ferrante, which is a mind that I trust. I’ve read all her books. It has been kind of like heaven. It’s been such a pleasure. Then when that’s finished I guess I’ll start to move into the next phase, which is trying to send it out, casting actors, and then ultimately directing it. Although, that’s a little ways away still.

In that story there’s a role for an English teacher who’s also a mom, but is a bit older than you. Are you considering possibly playing the role yourself?

No. I’m not going to play it. There are three women in the story. A woman who is almost 50, then a younger version of that woman, and then another woman who is also in her twenties. I’m writing roles that I would like to play, even though I won’t play them. I think there’s something so exciting about that.