Madonna sure knows how to cause a stir among her fans and has done exactly that in her latest TikTok video about her sexuality.

The Like A Virgin singer was in a playful mood over the weekend and took part in a popular trend on the social media app, which sees her attempting to throw a pair of knickers into a bin.

If she misses, it apparently means she is gay and, well, Madonna didn’t exactly practice her aim before shooting the video.

In the clip, the pop icon is seen standing in the middle of her very luxurious bathroom and throwing a pair of hot pink knickers – to match her hot pink hair, of course – into a nearby bin.

However, she doesn’t make the shot and throws her hands up in the air feigning despair.

‘If I miss, I’m gay,’ Madonna captioned the video. 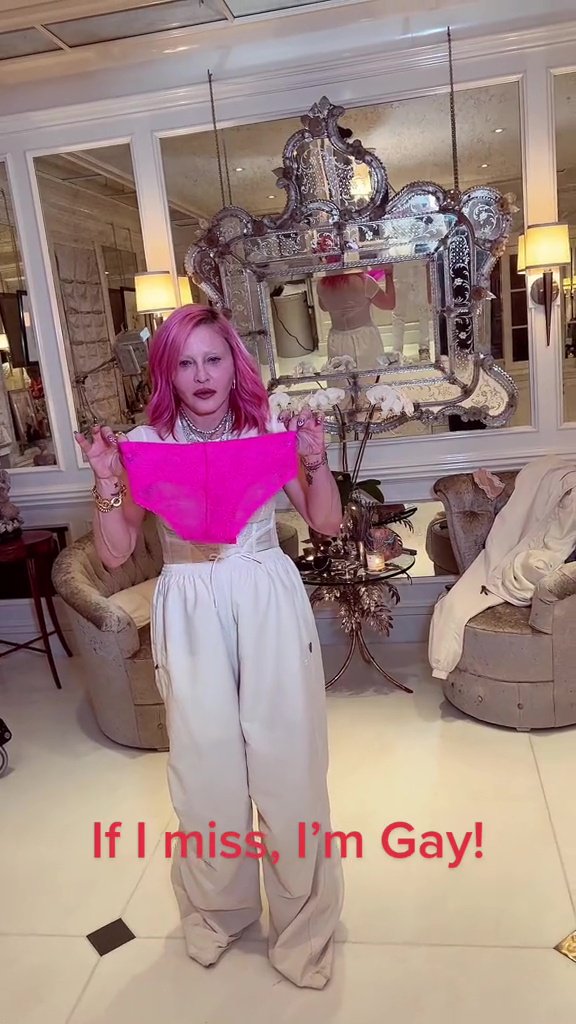 Of course, the singer could have just been keeping up with TikTok trends and having fun with the video, but many fans have naturally questioned whether it was a reveal about her sexuality.

‘Did I just witness Madonna coming out, good for her,’ one fan questioned.

‘Did Madonna just come out? And I’m witnessing it in real time??’ another wondered.

One fan said: ‘Why am i witnessing madonna’s coming out in real time.’

Another cheered: ‘I’m so glad I’m witnessing this.’

Madonna, 64, has always presented a sex-positive message in her artistry and was once asked about the idea that ‘everyone is born bisexual’ in a 1995 interview with MTV.

She responded: ‘I don’t have an answer for that. I think whatever it is we should embrace it and never make ourselves or other people feel ashamed for whatever it is.’

In a recent interview, the singer joked that her favourite snack was: ‘I can’t remember his name. Oh, no! Big d**k. I don’t ask that much.’

She also said during her YouTube video that the act that keeps her going was sex.

Madonna’s dating history has been well-documented over the years, with her most high-profile relationships including ex-husbands Sean Penn and Guy Ritchie who she divorced in 1989 and 2008 respectively.

She was most recently thought to be dating dancer Ahamalik Williams but the couple were reported to have split in April after three years of dating.