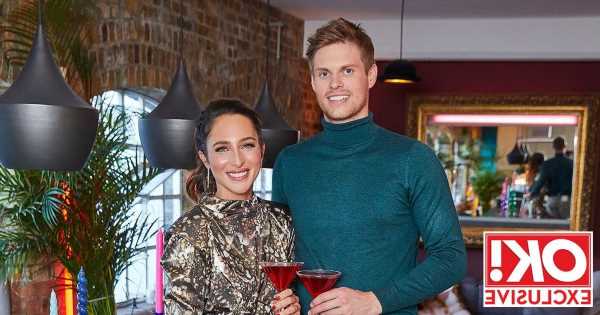 There's never any shortage of drama In Made In Chelsea, but this series has upped the ante even more for our favourite West London reality stars – and Maeva D’Ascanio and her on/off beau James Taylor have been at the centre of it all.

After an especially tumultuous few months, the couple have reunited and in our exclusive chat, they welcome us into their new home to tell us how why this time it's for keeps. The couple, who got together in 2019, seemed to be going strong until their double date with Paris Smith and Angus Findlay.

Maeva, 29, exploded at James, 26, ahead of their planned trip to see his family in Cornwall and they seemed to be heading for splitsville – with James then kissing another girl and Maeva falling back into the company of ex Miles Nazaire. Yikes!

However, we can now reveal that they're back together – and this time it's for good.

Here, they fill us in on how they’ve moved away from London, and open up about their plans – which include wedding bells and the pitter-patter of tiny feet…

Hi, both! You’ve had a bit of a roller-coaster romance this series. How are you now?

Maeva : Yes, I think going through this stage helped. When you’ve been in a relationship two or three years, sometimes you need to stop to understand each other.

James : I agree. I like to pretend everything is OK, whereas Maeva prefers to express her feelings. That led to conflict between us but everything is really good now.

Fans will see things unfold this week. What can you tease?

Maeva : Not much – but it’s a proper love story.

James: Maeva read somewhere that it’s the most stressful thing for a couple to do – and we can testify to that. We’re trying to make it into a home as quickly as possible but balancing that around a job is so stressful!

How do you feel about it, Maeva?

Maeva : It’s all very overwhelming as I’m not used to being far from London or in a large house. When we went through all the stuff on the show, that was a really big thing. Now, we’re going through another big thing, which is life!

What prompted the move?

James: My work. I used to commute just under two hours each way, so logistically it was the right idea to move closer.

Maeva : And I decided to follow him because I love him [laughs].

Aww! During the show, when things were difficult, did you imagine you’d get to this point?

James: If the love goes away or someone cheats, I might have thought it was over. But no, in my gut I knew we’d be back together.

Maeva: We have a passionate relationship. We come from different cultures and sometimes clash, as I can be more intense. The fact that we took some risks and were testing each other was unhealthy. But I think we knew we were going to get back together.

James: That was the gamble. We fought fire with fire but luckily it worked in the end.

What effect did filming have on what happened?

James: This series caught the most explosive rows we’ve had. It hit DEFCON 1 in some scenarios. We were so volatile and the cameras added more for us.

What’s it like when the cameras cut and you’re left with all those emotions?

James: I forget the cameras are even there and there are 30 people in the room watching you have this raw conversation. You almost say more than you would in private. When the cameras go off it’s still there, it’s still raw. You just have to process it.

Maeva : I find the cameras quite helpful. You’re forced to talk about subjects you might not if they weren’t there.

James: The cameras always pushed us a few steps ahead of where we’d be in our relationship if we weren’t being filmed. I think we can thank them for that!

Do either of you have any regrets about things you said or did in this series?

James: We could both have said things in different ways.

Maeva : In filming, you sometimes end up being a person you’re not supposed to be because you’re angry and feeling a lot of emotions. I’ve done a few things in this series I regret. I own it.

Is that difficult for you to deal with, Maeva?

Maeva, you’ve not had the easiest time when it comes to love and relationships. Have fans asked you for advice?

Maeva: So many people come to me for advice about love and finding confidence. It’s lovely for them to reach out but I don’t think I’m the right person to be giving advice [laughs]. But because of what I’ve been through, I’m in a position where perhaps I could offer some help. There are so many girls going through the struggles I did.

What about you, James?

James: I don’t really get asked for advice. Instead, people give it to me by the truckload. Given what’s gone on, many people have been like, “Leave!” or “Run!” I take it with a pinch of salt.

How does it make you feel when people say that kind of stuff to you, though?

James : It’s weird. People will come up and start talking to you like, “Ah, I saw you on TV last night,” and start talking about what happened as though it was literally yesterday but they’re five weeks behind. We’re in a different part of our lives.

Maeva: We’ve always had passion, so it was more of a communication thing. We weren’t understanding each other.

James: Our communication has always been a sticking point.

Maeva : Everything got a bit confused, didn’t it? I’m so happy we resolved those problems.

And what’s life like outside of the show now?

Maeva: It’s all very new and different. Getting settled into the new house is our priority.

James: Yes, we go out for dinner and drinks, and see friends, but when it’s just us we like to snuggle up on the sofa and watch TV – all the normal stuff. We treat our home as a space to unwind and feel cosy. It’s not an entertaining space. Maeva has slight OCD with cleaning, which is good for me. I’ve definitely gotten lazier since being with her. I’m sure we’ll argue about that at some point!

And how’s your dog, Clyde?

Maeva, you seemed put off by the dog, the flat and the family before. Are you happier with the idea of settling down now?

Maeva: I’m always stressed and it’ll take time to feel comfortable but I’m very happy. I’m living the life of a worker and housewife with my bloody dog [laughs]!

James : Maeva wants it all – marriage, kids – but I’m postponing until it’s a good time.

According to Liv, that’s what you want too, James!

James: I do but not within a week! We’ll have to wait at least nine months for one of those things…

You’ve got the house, so what’s next?

James: I think we’ll keep it classic and go “in order”. We’ll need to be careful though. We don’t want a baby at the wedding!

Would you let Made In Chelsea film the wedding?

James: Producers have already been in my ear about it. We’re open to the idea. That’s as much as we can say at the moment. It’s definitely on the cards.

Now you’re in such a good place, what are you most looking forward to?

James: How do you know that’s coming?!

Maeva: Seriously though, I’m just excited to have more fun moments together. Now we can communicate better, we’re getting stronger. We’re doing life together and the future is all about making that even bigger… which means having a family.

What about you, James?

James: I’m savouring the time we have until Christmas. We’ve got three months off filming, the biggest chunk since I started. I like the idea of getting into a routine, make the foundations of our relationship solid.

Cheesy question alert… What’s your favourite thing about each another?

James: Nothing. We hate each other [laughs].

Maeva : I’ve got so many but I love that James is so driven, generous and kind.

James: Maeva has the biggest heart and her morals are fantastic – even though on camera they sometimes seem questionable!

Finally, what’s your biggest strength as a couple?

Maeva : Know each other so well.

James: Too well! On days when we’re stressed or feeling down, we know each other’s triggers. We know when to give the other one space and we trust each other.

Made In Chelsea airs Mondays at 9pm on E4.