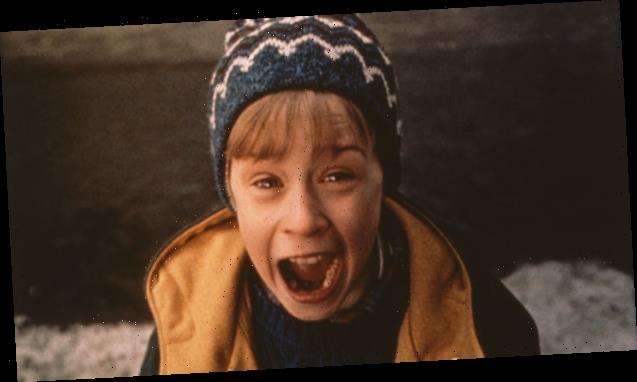 Macaulay Culkin’s ‘Home Alone’-themed COVID face mask is the best one we’ve seen! The actor has fans going wild over a new selfie he shared to Twitter on October 7. And, all of a sudden, we’re dying to watch ‘Home Alone’!

Macaulay Culkin is masking-up amidst the coronavirus pandemic while paying homage to the movie that made him famous. The actor, 40, took to Twitter on Wednesday to share a photo of himself sporting a Home Alone face mask that depicted his character, Kevin McAllister’s famous bathroom scene. — You know, the one where he screams while patting his cheeks with his hands! The hysterical scene was the inspiration behind the final movie poster for Home Alone 2 (1992).

In the viral photo, Macaulay even posed in front of a Lego creation of the Empire State Building. Fans who are well versed in the movie franchise will know that Home Alone 2 was filmed in New York City, and the major landmark made a stunning cameo. Talk about the nostalgia of it all.

“Just staying Covid-safe [by wearing] the flayed skin of my younger self,” Macaulay tweeted alongside the epic selfie. “Don’t forget to wear your masks, kids,” he added. We can’t help but notice how realistic the photo of his younger self looks printed on the mask!

It’s hard to believe that the original Home Alone movie premiered in 1990. It’s become a holiday tradition, with many television networks (and families around the globe), to air the film repeatedly around the holidays. Not to mention, ’90s kids grew up with Macaulay, who was catapulted to fame after Home Alone‘s box office success. Disney announced in 2019, that a Home Alone reboot is in the works for its new streaming service, Disney+.

Back in August, Macaulay sent fans into a frenzy when he referenced his younger years on Twitter. “Hey guys, wanna feel old? I’m 40,” he wrote, adding, “You’re welcome.” The tweet went onto earn over three million likes.