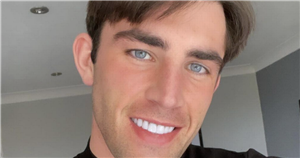 Love Love Island? Our Factor 50 email brings all the goss direct to your inbox

Love Island star Jack Fincham was reportedly questioned by police after onlookers claimed that the reality star was acting suspiciously.

The 2018 winner of the ITV2 show, who recently 'split' from Frankie Sims just two months after going official, was reportedly detained by police in a car park in south east London at 5am on Sunday 11 July.

Jack, 30, was seen in a blue and white tracksuit as he was detained by police, in pictures obtained by The Mirror.

The reality star had reportedly been spotted by onlookers acting suspiciously in a car park behind a set of semi-detached houses.

Four officers spoke to the former stationery sales manager, from Essex, before his family arrived to take him home, according to the publication.

OK! has contacted a representative of Jack for comment.

A Metropolitan Police spokesman told The Mirror: "Police were called at 5.18am to reports of a man acting suspiciously. Officers attended and detained a man. No offences had been committed. He was collected by his family."

The alleged incident came days before it was revealed that Jack and TOWIE star Frankie, 26, 'split' just two months after going official.

A source has told OK! the pair have called it a day after a string of arguments. “Jack and Frankie have split,” a source told us . “They’ve had a couple of rows and have unfollowed each other on Instagram.”

Frankie, who was previously left stunned after Khloe Kardashian stalked her Instagram and liked her photos, has also removed all of her loved-up snaps with Jack on her Instagram page.

The couple first sparked romance rumours when they were seen sharing a kiss on a night out before going home together.

Frankie was seen enjoying an evening with her sisters Chloe Sims, 38, and Demi Sims, 25, before Jack joined them.

Frankie shared sweet footage of herself and Jack with her Instagram followers.

She could be seen raising her cocktail to the camera, before snuggling into Jack who sweetly kissed her cheek.

Looking over the moon with his affectionate move, Jack then beamed to the camera: “Cheers to a happy life!”

In the pictures, she was seen sitting on Jack’s knee as he wrapped his arms around her waist.

She wrote alongside: “Boyfriend material that’s what he says @jack_charlesf we were together in 2019 & we reunited in 2021 xx.”