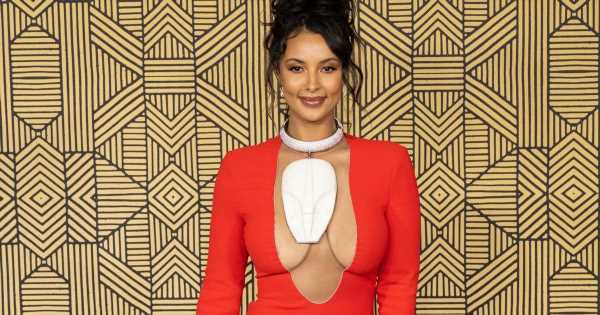 Maya Jama walked the red carpet in a daring dress at the Black Panther: Wakanda Forever premiere on Thursday evening.

The future Love Island host, 28, joined a host of other stars for the film premiere in London, where she wore a bold red and white printed dress with a plunging faux neckline.

The star wore a statement necklace with an eye-catching pendant and wore her hair tied up in an elegant yet messy bun, finishing things off with a brush of shimmering make-up.

Maya, who is set to become the new host of Love Island next year, was joined by other stars at the event including AJ Odudu, Michaela Coel, Lupita Nyong'o, Martin Freeman, Sir Lenny Henry, Alex Scott and Leigh-Anne Pinnock.

Also at the premiere was her ex-boyfriend Stormzy, 29, who wore a bright pink suit, after admitting he made “mistakes” in their former relationship.

Speaking to Louis Thereoux, Stormzy – who dated Maya between 2016 and 2020 – opened up on the couple’s break-up last month, saying that he doesn’t “want to feel like that again”.

He said: “My break-up, that was probably the biggest catalyst for growth as a man.

“It was like, OK, you made a mistake and you lose someone you loved, someone you cared for, someone who is special to you.

He added: “I didn’t do what a man should do to fully appreciate love, and care for his woman.”

It comes after Maya was revealed as the new host of Love Island, after former host Laura Whitmore announced her departure.

Maya had been rumoured to step into Laura’s shoes for months before the news was confirmed. When it was, she gushed: “I’ve always been such a massive Love Island fan and I’m so excited to be hosting one of the nation’s favourite shows! I can’t wait to get into the villa to meet all of the Islanders.”

While Director of ITV Reality Programming and Acquisitions and Controller, Paul Mortimer said, “Finding a new host to follow the wonderful Laura Whitmore was never going to be easy.

"In Maya Jama though, we have another high profile fan of the show who’ll be a great addition to the Love Island family."