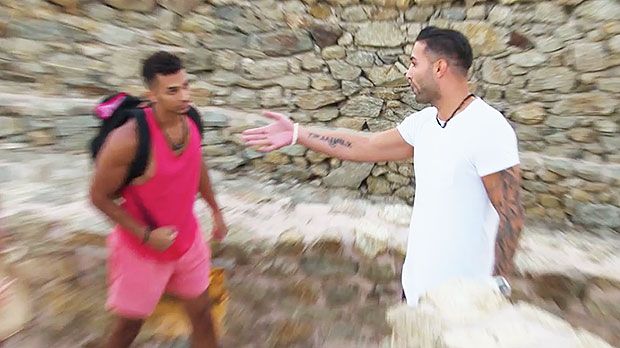 Things get INTENSE between Kyle and Brent on the ‘Lindsay Lohan’s Beach Club’ finale, and HollywoodLife has an EXCLUSIVE sneak peek of their wild fight.

Brent Marks has gotten into it with numerous cast members on this season of Lindsay Lohan’s Beach Club, and during the finale, it looks like Kyle Marve is his newest nemesis. In the EXCLUSIVE preview above, tensions are high between the guys, and it leads to a physical altercation. “I feel the temperature rising in the car,” Gabi Andrews  in a confessional. “I can feel the tension. I’m starting to get nervous sitting next to Kyle now.” The scene cuts to Kyle getting heated in the backseat of the van, with Brent one row behind him. “You’re going to stay calm,” Gabi tells him. “Nothing’s going to happen. You’re going to keep your head in your hands. We’re going to be civil people.”

It’s unclear what exactly transpired to lead to Kyle getting so worked up, but he tells Gabi, “The b***h word…I don’t play that.” As Gabi continues to try and calm Kyle down, he makes it clear that he’s not having it, and starts opening the door to the van as it’s still driving. The car eventually slows down, and Kyle jumps out, urging Brent to join him. “Get out the car, bro!” he yells. “He threw out the b***h word, I don’t play that b****h word.” At that point, the other cast members are surrounding Kyle, with several guys trying to hold him back. Meanwhile, Brent storms out of the car and starts walking away.

“You heard me — I don’t repeat myself,” Brent tells Kyle. “I don’t need to walk away. I can say it again! I called him a b***h because Mike [Mulderrig] should be here instead of him.” At that point, Kyle comes completely unhinged, and races toward Brent to physically attack him.

The clip ends there, so you’ll have to tune into the finale of Lindsay Lohan’s Beach Club on March 25 at 10:00 p.m. on MTV to see what happens next! Plus, we’ll find out which ambassadors Lindsay Lohan will choose to continue working for her.