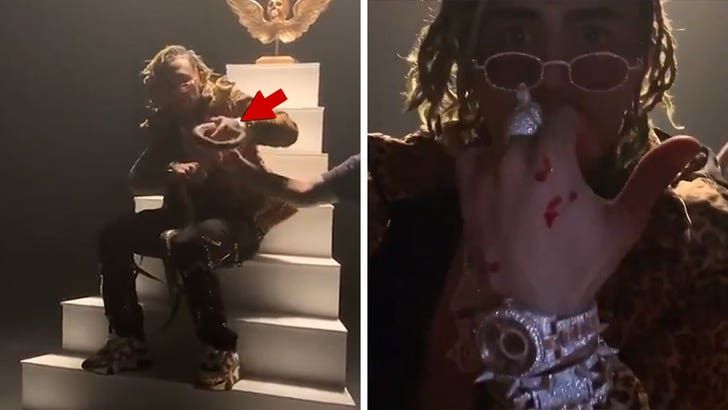 Lil Pump damn near became a snack for a slithering snake … and it left him a bloody mess.

The rapper was shooting a music video Thursday night and the crew was handing off a snake to Lil Pump, who was sitting on some sort of stair-like throne. Then, it happened.

The snake, out of nowhere, whipped around and sunk its fangs into Pump’s left hand. The scary moment was captured by podcast host Adam Grandmaison — aka Adam22. You can see Pump flail as he extricates himself from the reptile. He then shows off the gnarly injury.

LP’s left hand is covered in blood. And, if you look closely near the end of the vid … it appears as if the snake’s setting its sights on a second victim.

Good news for Lil Pump … he doesn’t seem that hurt, saying, “I just got bit by a snake WTF.” He threw in a snake emoji on the caption and a few laughing ones before adding, “I can’t f**k [with] no snakes. I hope I don’t die.”

Where are the Kings of Pain when ya need ’em?