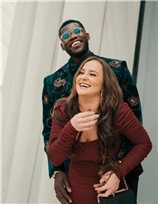 When Teen Mom 2 fans learned that Leah Messer was dating Jaylan Mobley, they were almost as ecstatic as Leah herself seemed to be.

After all, longtime viewers had watched Leah overcome all manner of obstacles, including addiction, two divorces, and a seriously messy custody battle.

Jaylan seems to be the embodiment of the happiness that Leah deserves, and fans are delighting in Leah’s updates about how well the relationship is going.

The rumors that Leah and Jaylan are engaged appear to be bogus, but there have been several other indications that these two are in it for the long haul.

Earlier this month, for example, Jaylan bought Leah a house!

So much for the critics’ concerns that he’s just using her for her money!

Yes, Jaylan has a successful career of his own, which is great, as it looks like he’ll soon be acquiring a wife and three stepdaughters.

Of course, Leah is still the primary breadwinner in the relationship, but we doubt that Jaylan is bothered by that.

This is a woman who’s been earning mid-six figure paychecks from MTV for the past several, and she has income pouring in from sponsored content deals and numerous other business ventures.

Not bad for someone who just turned 30!

Yes, Leah hit the big 3-0 this week, and Jaylan celebrated by whisking her off to New York City for a weekend of shopping and luxurious pampering.

He also assembled loving birthday tributes from friends she hasn’t seen in a while.

Leah shared some of these messages on Instagram, along with a message of gratitude for her boyfriend, her loved ones, and her life in general.

“I’m so grateful for all the birthday wishes from everyone.”

From there, Leah described the NYC vacay that Jaylan surprised her with.

“Although I was perfectly content staying home and moving,” she wrote.

“I just want to say that my heart is so full. I have all the love & support I could ever need and want in this life. I’m so grateful & love you all so much. Thanks so much babe & thank you everyone. I really love y’all so much!”

Of course, Jaylan isn’t the only bright spot in Leah’s life these days.

She also has her three daughters, and the support of numerous friends and family members.

“I have all the love & support I could ever need and want in this life. I’m so grateful & love you all so much,” she wrote.

“Thanks so much babe & thank you everyone. I really love y’all so much! Birthday week coming in hot!”

Leah is feuding with Kailyn Lowry at the moment, and the lack of birthday wishes from Kail has been taken by many as a confirmation of the bad blood between these two.

But hey — we’re sure they’ll work things out eventually.

And if they don’t … well, Leah has plenty of love and support in her life these days, and while we’re sure she’ll miss her friend, she’s probably trying to keep her thirties as drama-free as possible.