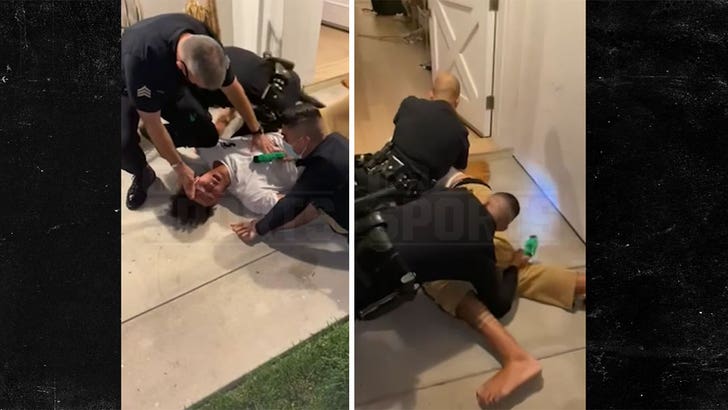 Cops are so livid over the way they say Jaxson Hayes fought them during his arrest last month … they’re now strongly urging NBA commissioner Adam Silver to take action against the Pelicans star.

In the note — which is four pages in length — the police union says 6’11, 220-pound Hayes became combative on July 27 after they responded to a domestic disturbance call involving the hooper.

Law enforcement says Hayes refused orders, hurled the n-word at officers, and pushed one cop so hard into the wall, the basketball player injured the “much physically smaller” man.

We’ve obtained photos of the cop’s alleged injuries … and they appear to show the officer’s elbow was swollen and bloody following the incident.

LAPPL went on to say in the letter that after a review of body camera footage from the night … they strongly believe Hayes was out of line, and criminally assaulted an officer during the arrest.

“Mr. Silver,” the officers said in the letter, “the actions of your player were unlawful, completely unacceptable and are as clear a prima facie case of violating several of the National Basketball Association policies as we have seen.”

“We respectfully request that you immediately initiate a thorough investigation into Mr. Hayes’ actions before, during and after the incident and to take appropriate corrective action to hold Mr. Hayes accountable.” 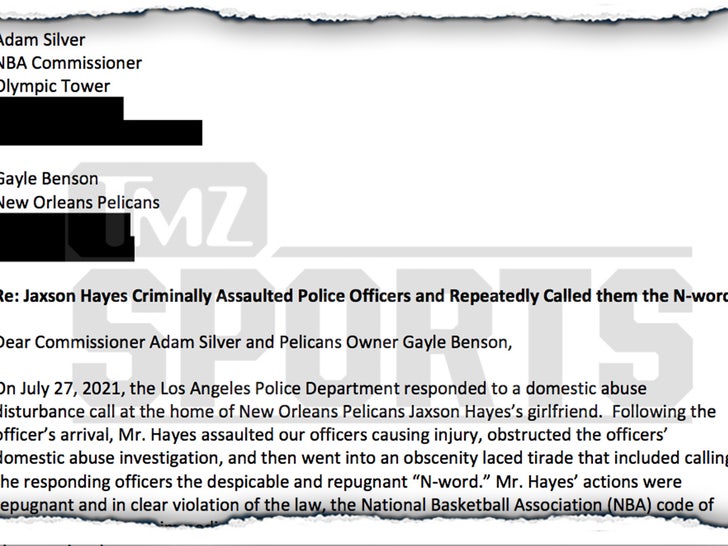 They continued, “The video is clear. Your swift action in this incident is warranted.”

The union also says in the letter Hayes’ alleged use of the n-word was completely unacceptable … saying it’s on the same level as when NBA player Meyers Leonard used an anti-Semitic slur during a March video game stream.

“We ask you to investigate Mr. Hayes’ use of the ‘N-word’ during the incident,” cops said, “and based on the obvious evidence, hold him accountable for the blatant violation of the NBA’s values of ‘equality, tolerance, inclusion and respect.'”

LAPPL concluded the letter asking Silver and the NBA to “send an unequivocal message that assaulting police officers will never be tolerated by the NBA.”

“Given the severity of this incident, we sincerely hope you take decisive action in this case.”

As we previously reported, Hayes was arrested following the altercation with cops … and was booked on a resisting arrest charge.

The 21-year-old has claimed cops used excessive force on his neck, causing him the inability to breathe at some points during the arrest.

LAPD officials launched an investigation for possible use of excessive force after Hayes claimed he couldn’t breathe during the arrest.