LaNisha Cole is getting candid after shading her baby daddy Nick Cannon!

As you may know, the 40-year-old photographer appeared to throw a dig at The Masked Singer host for not being there “day in and day out” when it comes to parenting their daughter Onyx Ice. The call-out seemed to be in response to fans sending her a post shared by Abby De La Rosa of some holiday photos with Nick and their children, 18-month-old twin sons Zion and Zillion and 1-month-old daughter Beautiful Zeppelin. She wrote earlier this week:

“Thank you for the messages. It’s important for me to keep things positive and maintain my peace in the midst of it all. It’s not easy but I have to do it for my daughter. She is incredibly blessed and is surrounded by so much love – and it’s not fake IG photo op love – it’s real day in and day out love.”

Oof! While neither Abby and Nick had not reacted to the shade, one of his other baby mommas quickly stepped in to defend him! Bre Tiesi told her followers on Monday:

“Nick always shows up. Always present, happy, consistent, loving parent and an even better person. We love u!”

Now, the drama does not seem to be over just yet! LaNisha had more to say about the situation on Wednesday, first sharing a message asking her followers to open up about “leaving toxic relationships” on Instagram Stories that said:

“I’ll talk about my journey one day too but until then I want to hear more from your guys. Men and women. Tell me your stories of overcoming obstacles and leaving toxic relationships.” 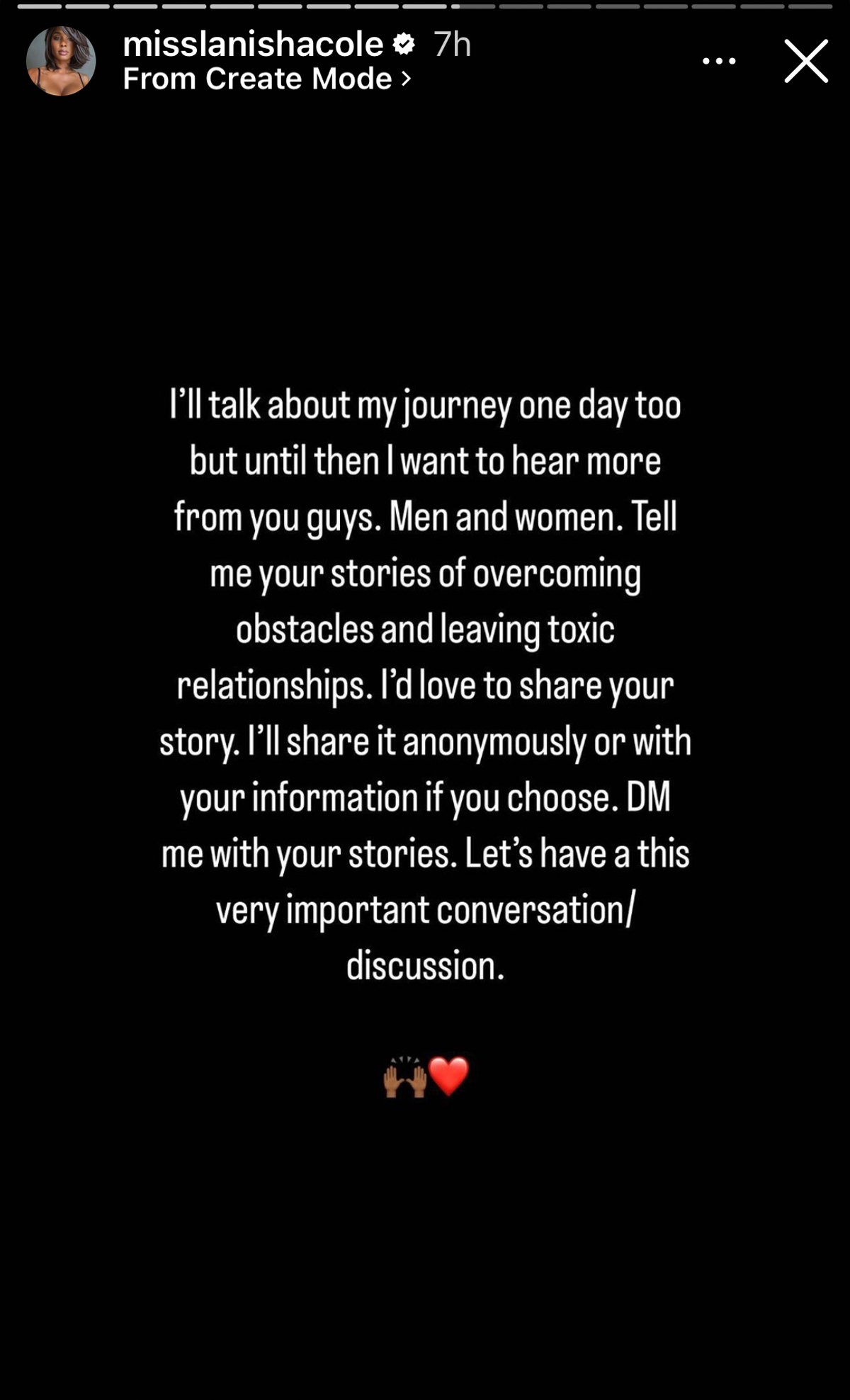 She then wrote in a lengthy follow-up post to slam those who’ve been sending her “nasty” messages while touching on to her situation with Nick:

“And for the people who still feel the need to be nasty towards me and send me disrespectful messages… I get that it’s easy to sit on your phone and look at a tiny glimpse of a person’s life and feel like you’re better than them. Yes I’ve made mistakes. Yes I’ve put myself through unnecessary pain and heartbreak (which we’ve all done in the name of love. You have too!)”

However, LaNisha said she’s “choosing to do better” moving forward, adding that there are things people haven’t seen that’s been going on behind the scenes:

“Calling me baby mama #538 every time I say the sky is blue is uncalled for and it’s getting old. I get it. My life plays out publicly but there’s a lot you don’t see. There’s always so much more I want to say but this isn’t the time.”

Despite her issues with Nick at the moment, LaNisha noted she “wouldn’t change” anything about what happened in the past:

“I wouldn’t change a single thing about my journey because I’m in a beautiful place now and everything has to happen the way it did for me to get here. I’ve made peace with whatever is causing you to be so bitter towards a person you don’t know. Get out of toxic comment sections on social media. It’s not real life.” 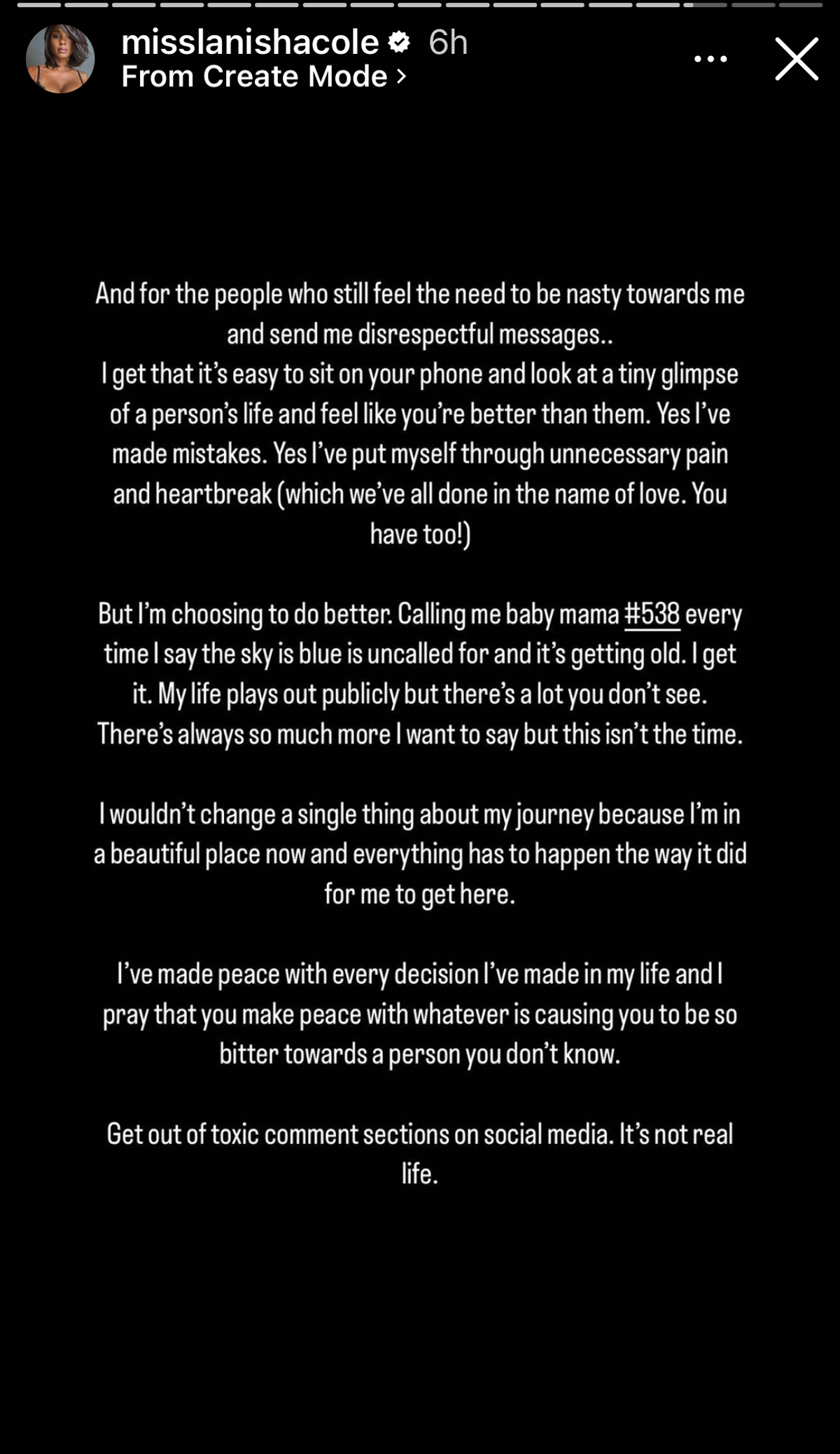 At this time, Nick still hasn’t addressed being called out for his poor parenting. We’ll have to see if he or LaNisha open up about what’s been going on in the future, but what a messy situation so far! Thoughts on the matter, Perezcious readers? Let us know in the comments below.