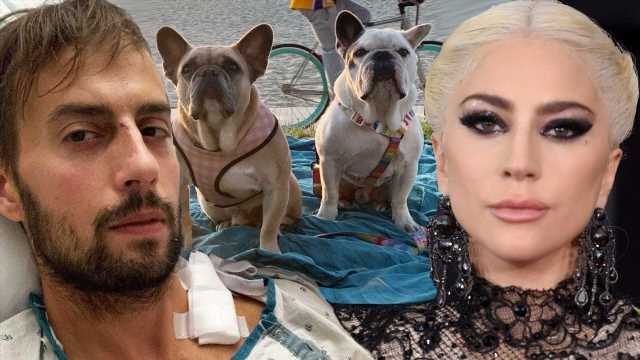 Five people have been arrested in the case of Lady Gaga’s dognapping. The alleged culprits were arrested Thursday on charges that include attempted murder and robbery, ET confirms. ET has reached out to Gaga’s rep for comment.

The news comes two months after Gaga’s dog walker and friend, Ryan Fischer, was shot while walking three of the singer’s dogs on Feb. 24. Her dog, Asia, managed to escape and was later recovered by police, while her two other dogs, Gustav and Koji, were dognapped at the scene.

A rep for the Los Angeles Police Department confirmed to ET on Feb. 26 that the dogs had been returned and reunited with the singer’s team. The LAPD told ET at the time that a person had dropped off the dogs at a local police station.

Fischer survived, though in an update last month, he revealed his lung had collapsed multiple times and that he was struggling with trauma from the incident.

According to a press release, the LAPD’s investigation revealed the identities of the three suspects that police believe were involved in the robbery and shooting of Fischer — James Jackson, Jaylin White, and Lafayette Whaley. Detectives do not believe the suspects were targeting the victim because of the dogs’ owner. However, according to police, evidence suggests the suspects knew the great value of the breed of dogs and was the motivation for the robbery.

Harold White and Jennifer McBride were also arrested, as alleged accessories after the initial crime. McBride reported that she found the dogs and responded to the reward email to return the dogs. She also ultimately brought the dogs to LAPD Olympic Station. McBride also said she responded to the email about the $500,000 reward money Gaga said she would give to the person who returned them. Detectives claim they have been able to establish McBride had a relationship with the father of one of the suspects, White.

All five suspects are documented gang members from Los Angeles.

In response to the arrest of the alleged dognappers, Gaga’s father, Joe Germanotta, exclusively tells ET, “That’s fabulous news. I hope the L.A. prosecutor doesn’t let them go. It’s taken a while and I’m proud of the police department out there for sticking with it. As I said, I just hope that the DA doesn’t let them go now. I’m going to give my daughter a call. I’m sure she’ll be happy.”

See more on the case in the video below.