The 64th annual Grammy Awards just got a bit more ~fabulous~ thanks to Lady Gaga who performed at the big ceremony. As if her performance weren’t already something to be excited for, the superstar is up for five (!!) awards this year for her collaborative LP Love for Sale, a tribute to the late composer and songwriter Cole Porter, with Tony Bennett.

Lady Gaga gave us a little taste of her jazz + piano concerts as she sang two tracks from the album—“Love for Sale” and “Do I Love You?”—in honor of Tony. The iconic singer, who has had a prolific career spanning over five decades officially retired back in mid-2021 as his battle with Alzheimer’s prevented him from being able to continue to perform.

In an emotional moment, Gaga said, “I love you. Tony. We miss you,” at the end of her performance.

[email protected] sent her love to @itstonybennett during her touching #LoveForSale performance at the #Oscars ❤️ pic.twitter.com/0JUW5L0tXT

Love for Sale is the second collection of iconic duets from Gaga and Tony (I mean, who could forget their original performance of “Cheek to Cheek,” from their first album at the 2014 Grammys?!)

Gaga told People, “I think it was the next day, after the record released and had gone No. 1, [Tony] said, ‘I wanna make this Cole Porter record with you,’ and I said I would do it, and then guess what? We did it!”

This past August, Tony played two concerts with Gaga at New York’s Radio City Music Hall that were broadcast on a CBS Special titled One Last Time: An Evening With Tony Bennett and Lady Gaga, before pausing future performances. 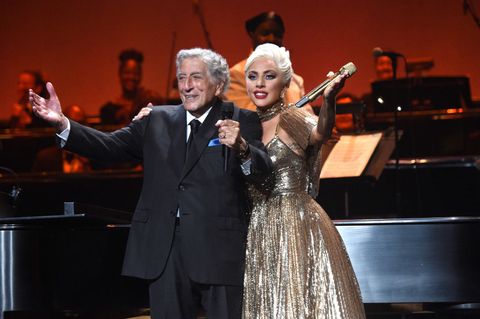 “There won’t be any additional concerts,” said Danny Bennett in an interview with Variety. “This was a hard decision for us to make, as he is a capable performer. This is, however, doctors’ orders.”

At least Lady Gaga will continue Tony Bennett’s legacy for a long time and hopefully, this won’t be the last we see her performing great jazz hits.