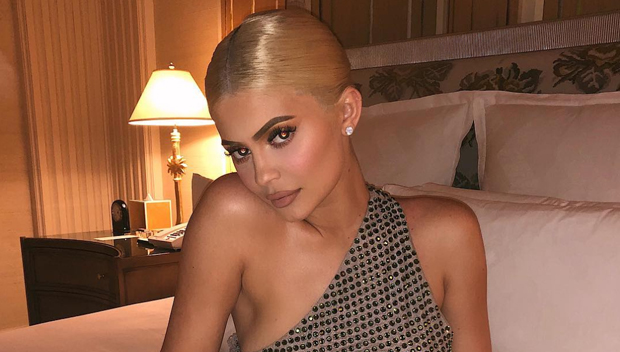 Goddess! Kylie Jenner is rocking one of her most glamorous outfits ever in a nude crystal encrusted gown. We’ve got the pic as sis Kim is teasing there might be a family Xmas card.

After much protestation by Kim Kardashian that the family’s annual Christmas card was a thing of the past after all of the drama organizing their 2017 shoot, it looks like things are back on. She teased that her mom and all of her sisters were on set for 2018’s pic and at the same time Kylie Jenner revealed the most stunning gown while glammed up for a photo shoot. It seems to be much more than a mere coincidence and if the 21-year-old’s incredible dress is any indication, this might be the most gorgeous KarJenner Christmas card ever!

Kim tweeted out, “Ok I have all of my sisters and my mom on set! I’m trying to surprise them with a Christmas Card shoot but just thought of this idea and Kanye is out of town! What do I do????” Umm, go on with it anyway!!! Kylie is seen in a makeup room after being done up by a glam squad and is wearing one of the most beautiful gowns we’ve ever seen her in. It features sheer nude sheer fabric covered in a zillion glittering crystals that hugs every inch of her amazing curves.

The cosmetics queen is definitely ready for her close up, wearing super dramatic dark and gold eye shadow, a nude lip and heavy dark brows. Her platinum locks are done up as a high ponytail atop her head with curls at the ends of her locks. She’s definitely going before the cameras with this incredible look that she shared only a few hours after Kim posted about them all being on set for the Christmas card shoot.

Kim, 38, had made a major stink that there wouldn’t be a family Christmas card in 2018 after she had major drama with older sis Kourtney, 39, over scheduling issues in 2017 where the photo nearly didn’t come together. The drama was documented for this season of Keeping Up With The Kardashians and saw the two sisters being absolutely vicious to one another. But now that KUWTK has finished airing its current season, it looks like all is forgiven and they’ll be back to bless fans with another epic family holiday pic this year.