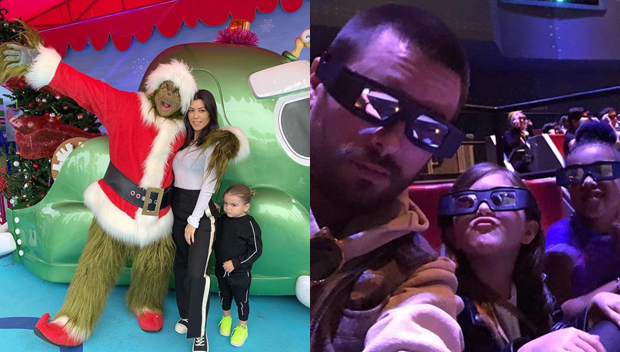 Scott Disick and Kourtney Kardashian reunited once again to take their kids Reign and Penelope, along with North West and Saint, on a trip to Universal Studios Hollywood. While Kourtney shared a pic of herself having a chat with The Grinch (she mentioned in her caption that he asked “why did you steal Christmas?”), Scott took Penelope and North on the Minion ride. Check out the pics below!

This family outing comes just a day after Sofia Richie and Scott were seen out and about with his daughter Penelope shopping on Dec. 8. Although rumors have swirled that she’s angry at Kourtney over pics she posted with Scott (more on that later), she put on a brave face while spending time with him and his kids. However, there seemed to be no sign of drama as they left the Gucci store together.

We reported earlier how Sofia was bothered by the pic of Kourtney and Scott “co-parenting” together while she lounged on a bed. “Sofia thinks that Kourtney is jealous of her relationship with Scott and will do anything to come between them,” a source close to Sofia told HollywoodLife EXCLUSIVELY. “Sofia was enjoying a wonderful night celebrating Hanukkah with Scott and a few friends at the same time Kourtney posted the picture of her laying in bed next to him. Sofia knows that Kourtney was aware she and Scott were together, and believes she posted that during the same time just to be spiteful.”

We’ll keep you posted with all of the latest news about Kourtney and Scott. In the meantime, check out all of their pics together from before and after they broke up in our gallery above.