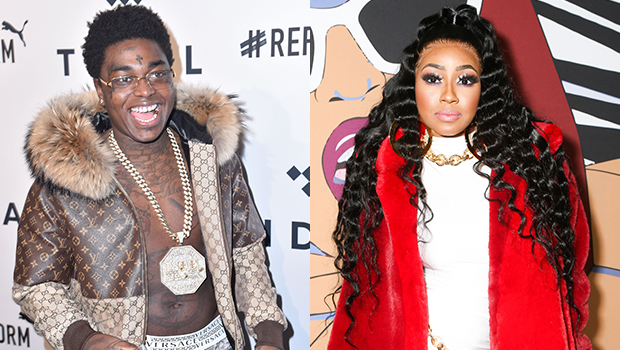 While filming a music video, Kodak Black got down on one knee and popped the question to Yung Miami…with a candy Ring Pop. Okay, what the heck is really going on? Watch the proposal here!

Kodak Black proposed to Yung Miami in front of a massive crowd on Dec. 9, which can be seen in the video below, obtained by TMZ. However, it seems like there’s a little bit more to the story and these two aren’t exactly engaged. Kodak reportedly used a purple Ring Pop to pop the question, and he put the ring on Yung Miami’s right hand, rather than her left engagement finger, after proposing. Even though the two embraced for quite a while after the proposal, the whole thing was reportedly just staged for a music video, according to MoneyAndHipHop.com.

The two were spotted packing on the PDA on-set, although it’s unclear whether or not it was all for video purposes, or if there actually is something going on between the pair in real life. Yung Miami is a member of the hip-hop duo, City Girls, and was linked to Drake earlier this year after he posted a photo of them partying in the club together following one of his shows. City Girls’ other member, JT, turned herself in on fraud chargers back in June 2018, and is currently serving a prison sentence. She is not expected out of jail until March 2020, and Yung Miami is clearly making sure her career doesn’t suffer in the meantime!

Interestingly, this is not the first time Kodak Black has left people confused with a proposal. Back in Nov. 2017, he was seen on video asking Cuban Doll — yes, the woman caught in the middle of Cardi B and Offset’s breakup — to propose to him with his own ring. She obliged, and then the two celebrated by surrounding themselves with money. Again, this seemed like another instance of the rapper goofing around.

Kodak was just released from prison in Aug. 2018, and he’s clearly wasted no time getting back to work. He’s expected to release his new album, Dying to Live, on Dec. 14, 2018.