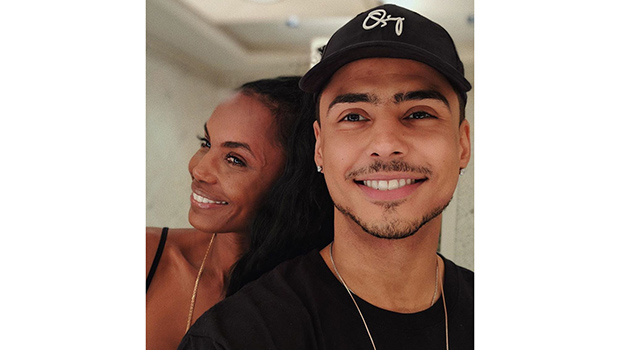 Kim Porter’s son, Quincy Brown, released a Christmas-themed music video on Dec. 21 and in it, he included a special sweet tribute to his late mom.

Kim Porter‘s son Quincy Brown, 27, expressed his love for his late mother by paying tribute to her in his new music video. The actor released the video, called “Quincy’s Christmas Time (Official Holiday Video)” on Dec. 21 and included a sweet and loving message to Kim at the end of it. “I love you, Mommy – Quincy,” the simple but touching message read in white text over a black background.

In addition to Kim’s tribute, Quincy’s video had other heartfelt moments and shows him bringing in the holiday spirit by surprising three different families involved in the Best Buddies organization with festive Christmas trees and decorations. “I love to see people smile. That’s the best gift. Thank you @bestbuddies & @googlepixel for helping me spread some extra love over the holidays. ♥️, ” Quincy captioned an Instagram post that shared the video.

Quincy, whose biological father is Albert Joseph Brown III and was adopted by Diddy, expressed his thoughts about the holiday, the first one without his mom, in the middle of the video. “It’s holiday season, it’s Christmas time. People let it overwhelm them because you know there’s gifts they’ve got to give people, places they want to go and we should just take a step back and realize the simplicity of what the holidays brings,” he said.

Kim passed away suddenly on Nov. 15 and since then, Quincy has expressed his grief on social media with photos and messages. Shortly after her death, he posted a pic with Kim and left a heartbreaking caption.“I am broken…& the only thing that makes sense right now is that you were way too good for this silly world we live in. I love you so much MOMMY. Please give Mee-Maw the biggest hug and kiss for me. ♥️💔♥️,” the caption read.