Kim Kardashian stepped out in a military inspired ensemble for some BFF time with La La Anthony as the pair headed to Dover Street Market.

Kim Kardashian, 40, was all about the 2000s with this look! The KKW Beauty founder stunned in a mossy, olive green crop top in New York City on Friday, July 16, creating a tonal look with a similar shade leather pant. The snug top appeared to be made out of a velour material, which she paired with the military inspired bottoms which included a safety-belt like closure and black piping across and down both legs. 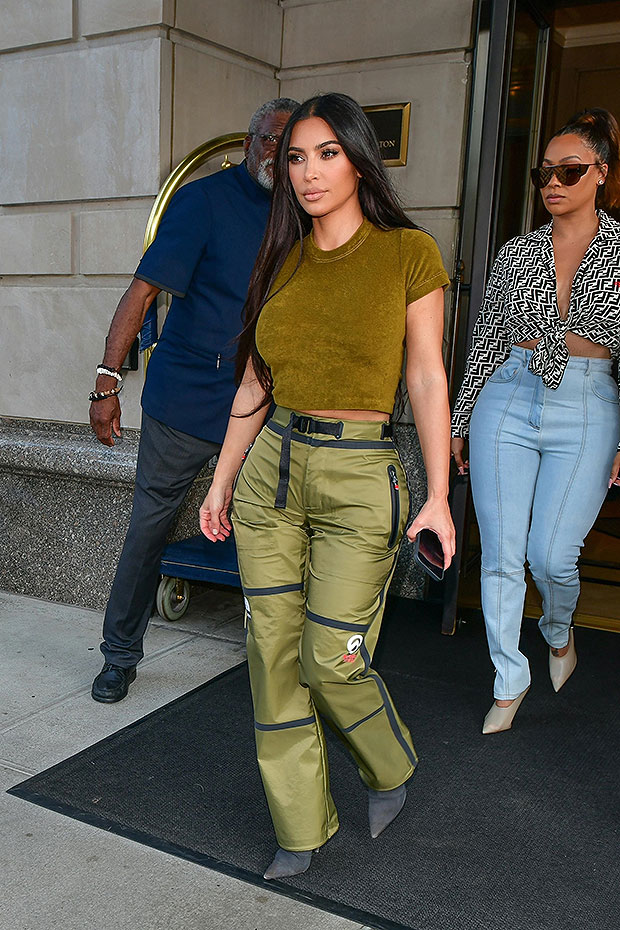 As always, the SKIMS founder’s glam was on point with her jet black hair center parted into a sleek blowout with a slight curl at the ends. She went with her usual nude-toned makeup, including a matte dusty rose lip, smoky eye and a glam set of eye lashes. Kim, who finished her on-trend outfit with a pair of pointy suede booties, was walking out of a Big Apple hotel with BFF La La Anthony in tow.

La La, who is currently going through a divorce from NBA star Carmelo Anthony, also stepped out in a stylish look. The former MTV VJ sported a black-and-white Fendi “FF” motif blouse, which she knotted to create a sexy cropped effect. She rocked the top with a faded trouser-style jean that featured piping down the center of each leg, finishing the look with a nude pointy shoe and black Fendi sunglasses. The mom of Kiyan, 14, threw her highlighted hair up in a ponytail to show off her diamond stud earrings.

Kim and La La walked from the hotel into an SUV, where they headed to the Dover Street Market in Kips Bay. The fashion destination is mainly known for its fashion-forward displays featuring high end clothing, such as Moncler Genius, CDG x Nike and other exclusive collaborations.

Like La La, the Keeping Up With The Kardashians star is going through a divorce of her own from husband Kanye West, 44 — and the two ladies are supporting each other as they weather the ups-and-downs. “La La’s been a shoulder for Kim to lean on during her divorce from Kanye, so it’s only natural that Kim would want to be there for her friend right now,” a source told HollywoodLife EXCLUSIVELY on June 21. “Kim is like family to La La and has always been a huge support system for her,” they also said.