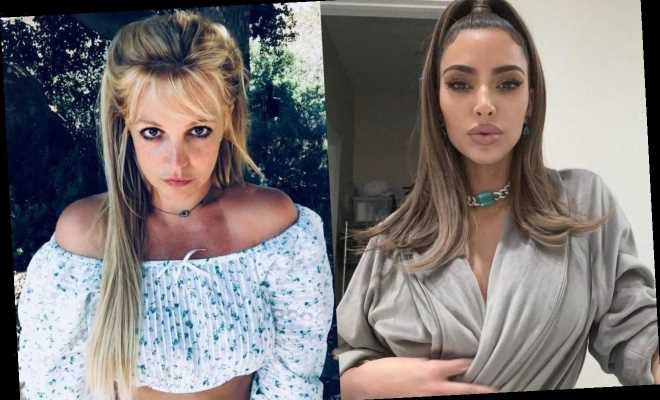 The ‘Keeping Up with the Kardashians’ star could relate to the ‘Toxic’ hitmaker, comparing the pop star’s 2008 public breakdown to her own experience when she was pregnant with her first child.

AceShowbiz –Kim Kardashian has opened up about her own experiences at the hands of the media after watching new documentary “Framing Britney Spears“.

The hard-hitting new film documents the “Toxic” singer’s treatment at the hands of reporters and the paparazzi, which in part led to her 2008 public breakdown and a hospital spell.

Now Kardashian has seen the documentary and she took to social media on Friday (05Mar21) to empathise with Britney and talk about the press attention she has had to deal with over the years, especially when she was pregnant with her first child, North West.

“So I finally watched the Britney Spears documentary this week and it made me feel a lot of empathy for her,” Kim wrote on her Instagram Story. “The way the media played a big role in her life the way it did can be very traumatizing and it can really break even the strongest person.”

“No matter how public someone’s life may seem, no one deserves to be treated with such cruelty or judgement for entertainment.”

Recalling the way she was treated by the media when she was pregnant and battling preeclampsia, which caused swelling and weight gain, the “Keeping Up With the Kardashians” star added, “I cried every single day over what was happening to my body mainly from the pressure of being constantly compared to what society considered a healthy pregnant person should look like – as well as being compared to Shamu the Whale…”

“I was shamed on a weekly basis with cover stories that made my insecurities so painful I couldn’t leave the house for months after. It really broke me.”

She said, “I’m sharing this just to say I really hope everyone involved in the business of shaming and bullying someone to the point of breaking them down might reconsider and instead try to show some understanding and compassion. You just never fully know what someone is going through behind the scenes and I’ve learned through my own experiences that it’s always better to lead with kindness.”