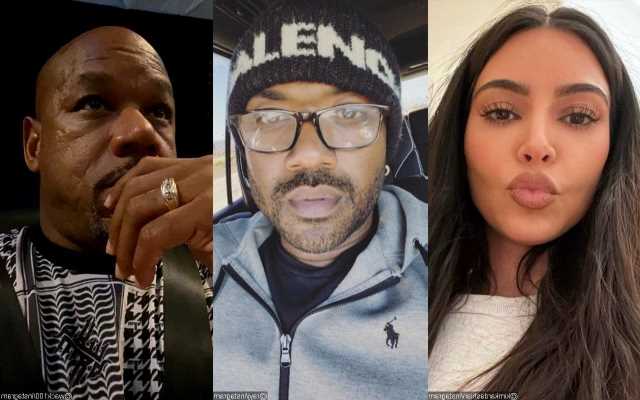 The former star of ‘Keeping Up with the Kardashians’ is accused by her ex-boyfriend’s former manager of disrespecting ‘black men’ to promote her family’s new Hulu show ‘The Kardashians’.

AceShowbiz –Kim Kardashian has been accused of lying by saying that there’s “no second sex tape” of her and Ray J. The “Keeping Up with the Kardashians” alum was blasted by Wack 100, the former manager of her ex, in a new interview.

Wack 100 insisted that he believes “The Kardashians” star only threatened to drag him and Ray J to the court after he revealed that there’s another sex tape. In a new interview with Clubhouse, he said, “They f**k around and forget about the lie they told, which was [the second tape] doesn’t exist.”

“So now that your new show is coming out, you’ve gotten so distracted with how you’re going to promote your s**t because you really ain’t got nothing going on outside of the disrespect you’ve been directing to your husband with his kids,” Wack 100 explained. “You know what you do? ‘We gon’ talk about the Black men again.’ “

Elsewhere during the conversation, Wack 100 noted that he’s “confused.” He fumed, “I’m confused. I’m confused. They whole motherf**king lying!” He continued ranting, “Listen, your whole motherf**king career been built on the backs of black men,” before asking, “So how the f**k are you paying attorneys to stop something that you now in possession of?”

Prior to this, Wack 100 called Kim out on Instagram. On Tuesday, April 12, the former manager of the “One Wish” hitmaker wrote, “Dam now I’m confused .. 1st @kimkardashian attorney says I’m lying this doesn’t exist. 2nd Now @kimkardashian is saying she’s blocking us releasing it so now I guess she’s admitting her & her team has been lying.”

“3rd. Her husband @kanyewest went on @theonlyjasonlee show and told the world me & @rayj delivered this footage to him in which he personally gave to @kimkardashian,” Wack 100 stated. “4th You accuse @kanyewest for going to the Internet when his issues are real life but your going to the Internet is based on 1 thing,” before adding, “USING THE BLACK MAN TO PROMOTE YOURSELF …. THE JIG IS UP YOU’VE JUST EXPOSED YOURSELF.”

In the first episode of “The Kardashians”, Kim broke down in tears after her son Saint West found an ad for her “new sex tape.” The 41-year-old reality star, who insisted that she’s “99.9 percent sure” that no other tape exists, tearfully told Kanye West over the phone, “Thank God he can’t f**king read yet. Over my dead body is this s**t going to happen to me again? I just want it gone. This is not going to f**k with me. It’s not.”

Kim later was seen calling her lawyers to “get something drafted so it can be taken down immediately.” She demanded, “I have four f**king kids. I can’t go through this again. This was 20 years ago. I’m not going through this again. I know the right attorneys this time, I know exactly what to do this time. I’m not going to let this happen to me again. I have all the time, all the money and all of the resources to burn them all to the f**king ground!”