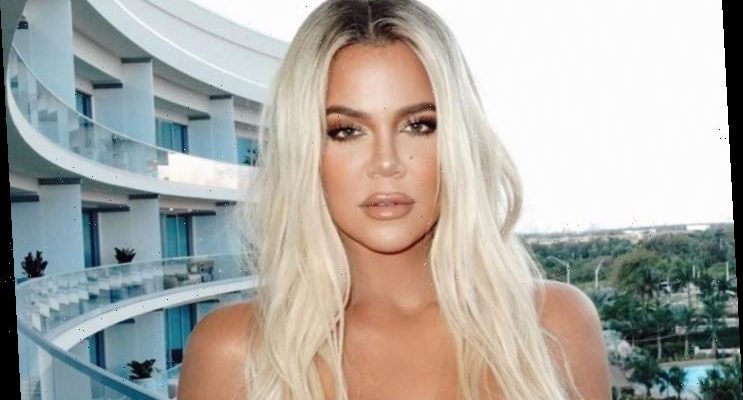 Winnie Harlow jumps into the comment section to urge the ‘Keeping Up with the Kardashians’ star to ‘STAY DARK!!!’ to which the latter responds, ‘Omg really?!?! You think??’

AceShowbiz –Khloe Kardashian is giving people a major throwback. The fashion mogul has stayed with her platinum blonde hair for the past few years, but now she has debuted a new brunette hair that will remind people of the early years of “Keeping Up with the Kardashians“.

Her new look made its first appearance through an announcement for Kim Kardashian‘s new fragrance, which was shared on Tuesday, October 29. In the campaign images, Khloe, Kim and Kourtney Kardashian posed in neutral bodysuits and sported big bombshell curls. While Kim and Kourtney kept their hair its natural deep brunette color, Khloe looked dramatically different in her warm chocolate hair.

It’s possible that her brunette hair was just a wig, but that didn’t stop fans and friends from gushing over the Good American Jeans owner’s dramatic makeover. Winnie Harlow urged Khloe to “STAY DARK!!!” with one agreeing, “YES! You’re gorg. Dark hair looks great on you.” Khloe herself has also responded by saying, “Omg really?!?! You think??”

“I love the color of your hair Khloe,” another gushed, as someone added, “Oh brown hair for you is IT, it’s the move I am CONVINCED.” There was also one who said, “The brunette moment we’ve all been waiting from you missed brunette khloe!!” One person commented, “Khloe I love your blonde hair but this brown looks fire on you!”

Khloe’s brunette hair aside, the sisters’ KKW Fragrance Diamonds Collection is set to launch on Friday, November at 3 P.M. EST. While Khloe described her fragrance as a “dreamy scent with a mix of sweet florals and musk,” Kourtney said that her perfume would feature a combination of “Golden Berries, Jasmine and Vanilla.” On the other hand, Kim said of her fragrance, “My scent is fresh and floral and becomes warmer as I wear it throughout the day.”