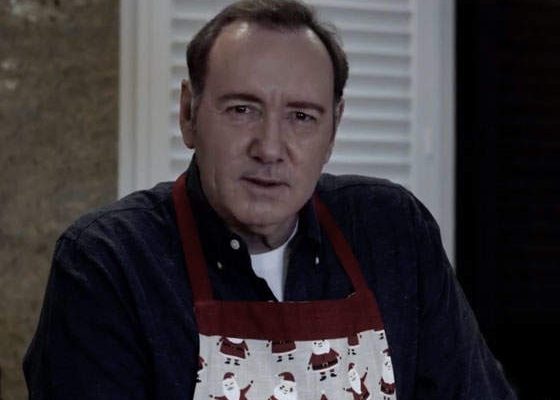 Just when I thought that the news on this Christmas Eve Day was going to be slower than my brain function after I shove an entire carrot cake and two bottles of wine into my mouth in honor of Jesus’ born day tomorrow, two big things happened: 1. Kevin Spacey was actually charged with felony sexual assault. 2. Kevin Spacey redefined WHAT. THE. FUCK. by shitting out a video of him seemingly taking on the numerous boy assault claims in character as Frank Underwood from House of Cards.

The Boston Globe says that Kevin Spacey will be be arraigned on a charge of indecent assault and battery at a Nantucket District Court on January 7, 2019. The alleged victim in the case is the son of former Boston WCVB-TV news anchor Heather Unruh. Heather held a press conference in November 2017, where she claimed that Kevin tried to rape her then-18-year-old son. Heather’s son was working at The Club Car Restaurant on Nantucket in July 2016 when Kevin came in. After the kid’s shift, he hung out with Kevin who bought him drinks. The criminal complaint states that Kevin asked the teen about his penis size and tried to get him to go to Kevin’s hotel room. Kevin also allegedly reached into the teen’s pants and grabbed his genitals. When Kevin went to the bathroom, a woman, who watched the ickiness go down, told the teen to run off. The teen, who is straight and had a girlfriend at the time, told the woman that he thought Kevin was trying to rape him. He also claims to have video of Kevin groping him.

Now, I don’t know if Kevin knew the charge was coming or just has perfect(ly creepy) timing, because today, he released a video of him in a Santa apron dribbling out creepy dialogue as Frank Underwood while in a crappily-lit kitchen. If you don’t feel like chasing after your skin after it crawls off your body as you watch the video, here’s some of what Kevin mouth-sharted out:

“I know what you want. Oh sure they may  have tried to separate us but what we have is too strong, too powerful. After all, we shared everything you and I. I told you my deepest and darkest secrets. I showed you exactly what people are capable of. I shocked you with my honesty. But mostly, I challenged you and made you think. And you trusted me, even though you knew you shouldn’t. So we’re not done, no matter what anybody says. And besides, I know what you want. You want me back.

Of course, some believed everything and have just been waiting with bated breath to hear me confess at all. They’re just dying to have me declare everything said is true and I got what I deserved. Wouldn’t that be easy? If it was all so simple. Only you and I both know it’s never that simple, not in politics, not in life. But you wouldn’t believe the worst without evidence would you? You wouldn’t rush to judgement without facts, would you? Did you? No, not you. You’re smarter than that.

Despite all the poppycock, the animosity, the headlines, the impeachment without a trial. Despite everything, despite even my own death, I feel surprisingly good. And my confidence grows each day that soon enough, you will know the full truth. Wait a minute…now that I think of it…you never actually saw me die, did you? Conclusions can be so deceiving. Miss me?”

So that ear-barf-inducing monologue was written, and it was said in front of a camera, and that footage was then edited and uploaded to YouTube, and that YouTube link was tweeted out to everyone on Christmas Eve Day. It took multiple steps to make this disaster happen, and at no point did Kevin’s legal or PR team say, “Err, it’d be quicker, less painful and less gross if we just pull out a gun and shoot ourselves in the foot. ” Maybe they did and Kevin didn’t hear them from the sound of his throbbing ego beating.

Not only will Kevin’s lawyers be busy with his felony sexual assault case, but they’ll probably find themselves with more work when Netflix sues him for this. And Santa Claus should sue him too. Santa doesn’t need this on the one day of the year he actually works.