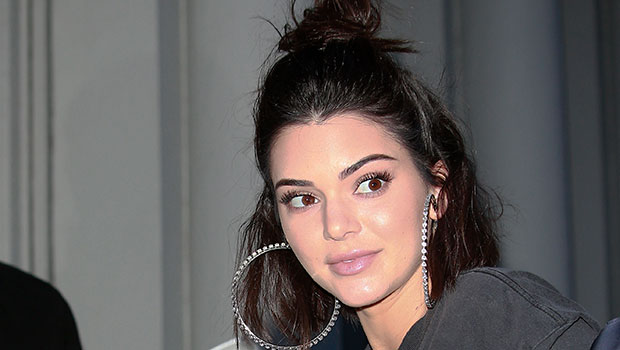 Kendall Jenner is the only KarJenner sister who hasn’t welcomed a baby — and intends to keep it like that. Even Hailey Baldwin could relate to Kendall’s pregnancy meme.

The KarJenner sisters’ empire is already set to be inherited by mini heiresses and heirs (nine so far). We saw this when Kylie, 21, Khloe, 34, Kim, 38, and Kourtney, 40 — along with Kris, Travis Scott and Kanye West — posed for a family portrait on a sofa, with all their kids in tow. And then there was Kendall Jenner. The 23-year-old model looked like that cool, childless aunt that’s always idolized in movies, and she shared the group photo to Instagram with a heart emoji. But Kendall included this meme in the next slide that set off a wave of laughing emojis in her comments section.

“Pregnancy in the air. Me:” the meme’s caption read, followed by a photo of a lady with a plastic bag over her head. Kendall was poking fun at her sisters’ love for babies, which earned three laughing emojis from big sister Kim. The KKW Beauty owner is even expecting another baby after a surrogate welcomes her fourth child! Meanwhile, Hailey Baldwin, 22, could totally relate to her modeling pal, even if the blonde beauty just married Justin Bieber, 25, in Sept. 2018. “AHHHAHAHAAA exactly,” Hailey commented underneath Kendall’s pregnancy meme.

This isn’t the first time Kendall has poked fun at her sisters’ baby fever. The runway queen shared a photo of her lazy day in Nov. 2018 — which consisted of lounging poolside in a string bikini — and captioned it, “All my siblings posting their babies and sh**t and i’m just like.” Just like, you know, being the world’s highest-paid model as of 2018.

Kendall may be avoiding the pregnancy in the air, but that’s not the case when it comes to love in the air. “I am very much someone who, I fall in love with someone – I’m like love-at-first-sight type of person. I know I’m gonna fall in love with you the second that I meet you,” Kendall admitted to Kourtney during a chat about romance, which was uploaded to Poosh on April 25. But Kendall’s not necessarily a hopeless romantic, as she added, “I am not the kind of person who can, like, gradually fall in love with someone. I don’t know how that’s supposed to go. I don’t understand that.”