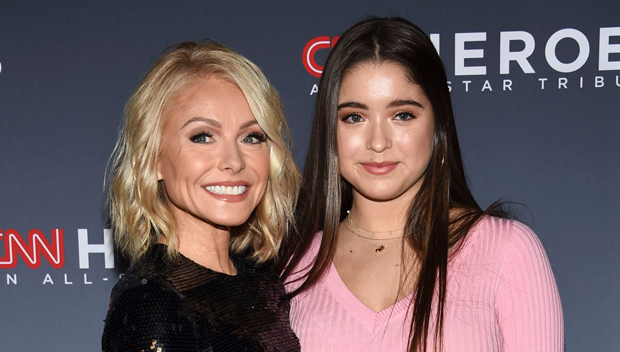 Kelly Ripa had a message for her daughter Lola Grace Consuelos after she joked that she had reported Mark Consuelos’ ab-baring video: ‘Shouldn’t you be reading?’

Kelly Ripa, 48, just shared a shirtless video of her husband Mark Consuelos, 47, and their daughter Lola Grace Consuelos, 17, is not here for it. In the video, originally taken by Riverdale co-star KJ Apa, Mark trolled KJ by asking if he’s seen his phone… while casually lifting up his shirt and showing off his abs. In addition to the video, Kelly wrote in the caption, “This thirst trap Friday has been brought to you by the letters K and J. Thanks @kjapa.” Of course, Lola was not a fan of the video or the caption, commenting, “I just reported this.” Kelly replied back, “Lola……..shouldn’t you be reading or something?” Meanwhile, KJ has since commented, “He found his phone thank god,” then Mark wrote, “I lost my phone again today.”

But this isn’t the only time Lola has shown her disapproval of a pic or video Kelly has shared of Mark. After Kelly posted a throwback picture of Mark holding Kelly by the waist on Mar. 15 and captioned the photo, writing, “fbf 2007 Those hands 💕,” Lola replied, “Is the caption necessary 🤦 .” After one fan unknowingly defended Mark and criticized Lola without knowing who Lola was, Kelly replied, “no she’s just grossed out. That’s my daughter 😂.”

Meanwhile, Kelly paid tribute to the late Luke Perry, who passed away on Mar. 4 after suffering a massive stroke on Feb. 27. “It’s a tough day around here, it really is,” she said the day after his death, on the Mar. 5, on Live With Kelly and Ryan. “We lost a great friend to the show, a great guy. Luke Perry passed away yesterday very, very, very shockingly.”

Happy to try calling it. #CommentsByCelebs

“And I am still stunned,” she added. “I woke up this morning thinking that there had to have been a mistake.”