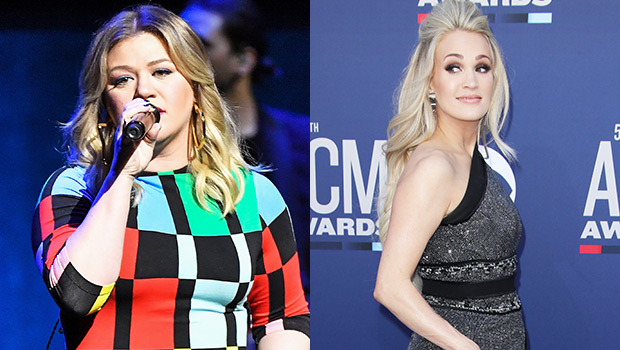 Kelly Clarkson spilled the tea about her ‘feud’ with Carrie Underwood on Twitter, and the situation may not be what you think!

What feud? Kelly Clarkson dished the dirt about her rumored feud with Carrie Underwood, revealing that… there actually isn’t any dirt. No tea, no shade, folks. The Voice coach, 36, tweeted out a photo showing herself and Carrie, 36, on the cover of Star magazine, which featured the headline “Carrie & Kelly: Secret Feud Explodes”. She’s not mad at Carrie. She’s mad at whoever picked the cover art!

“Someone just sent me this & I’m like why does she get the good pic & I have the worst expression I’ve ever made w/zero muscles being used in my face ha! I officially have a feud w/whoever used this pic! At least give me a good pic if y’all are gonna be lying is all I’m sayin’”, Kelly hilariously tweeted. Hey, both pics are really good! We get what she’s saying, though; Carrie got a glamorous pic, and Kelly looks kind of mad. Still beautiful, but mad.

The rest of the Star hed about the two American Idol winners’ “feud” is pretty great. It reads, “Why they’re TRASHING each other to friends. How the bad blood started. Carrie doesn’t know who she’s messing with.” It even includes an inset of Reba McEntire, who has apparently been “forced to step in” to get the ladies to stop fighting.

This isn’t the first time that Kelly and Carrie have had to deal with feud rumors. They tried to settle that for good by posing together at the 2018 Radio Disney Awards. Kelly actually talked about their supposed rivalry later in an interview with Entertainment Tonight: “Everybody always tries to pit me and Carrie against each other. So, when I saw her I was like, ‘You know what? Let’s just end this right now and get a picture together because we are never in the same place.’ And, like, it never happens,” she said. “And people always try to put it together like we’re enemies. And I’m like, ‘We don’t even know each other well enough to be enemies.’ So, anyway, I went to get a picture and then everybody lost their mind.”