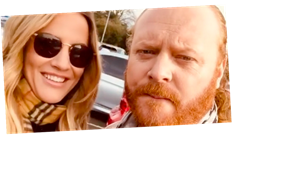 Keith Lemon has shared an emotional post in a throwback with his friend Caroline Flack, saying it was “so strange” to see her mentioned in BAFTAs tribute.

The former Love Island presenter tragically took her own life in February at the age of 40 and was remembered in the In Memoriam segment of Friday’s TV BAFTAs.

Celebrity Juice star Keith has now taken to social media to post an old photo of himself and Caroline after the tribute left viewers in tears.

The comedian, 40, wrote: “So strange seeing Caroline in the montage of people we have lost on the Baftas.

“This year is like a broken time machine where the future is just all wrong. I miss bumping into Flack at events and do's, and I miss seeing her on here. Here she is x.”

In the Memoriam section of the broadcast, which saw Normal People stars Paul Mescal and Daisy Jones reunite, featured tributes to Caroline, as well as Dame Vera Lynn, Gary Rhodes and Honor Blackman.

Richard Ayoade, who presented the virtual awards ceremony, told viewers: “Now it’s time to pause and reflect on some of the people we have sadly lost in these past 15 months.”

A throwback clip of Caroline hosting Love Island then played before a photo of Caroline appeared on screen.

Fans were incredibly moved by the tribute to Caroline, who passed away in February this year, and shared their emotion on social media, including close celebrity friends of Caroline’s.

Love Island voiceover Iain Stirling simply shared an image of the BAFTA tribute to Caroline and added a red heart emoji in the caption.

Meanwhile fans also shared their emotion at Caroline’s heartbreaking death after the tribute.

One wrote: “i just really really miss caroline tonight. seeing her in the baftas montage has hit me so hard out of nowhere and i just still can’t wrap my head around the fact she’s no longer here”.

Another added: “Seeing Caroline Flack in the memoriam at the BAFTAs hit so hard. It’s so damn wrong. Be kind!”

If you have been affected by this story, you can call the Samaritans on 116 123 or visit www.samaritans.org.