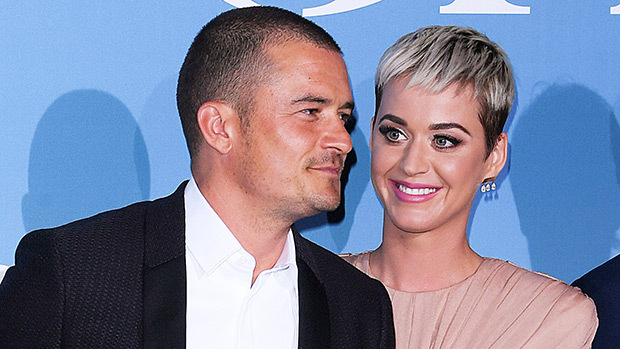 Katy Perry and Orlando Bloom were photographed taking a romantic stroll along a beach on Kauai, snorkeling gear in tow, during their Hawaiian getaway. See the sweet memento and more photos from the trip!

Instead of hearing “Merry Christmas,” Katy Perry, 34, and Orlando Bloom, 41, were surrounded by people wishing them “Mele Kalikimaka” leading up to the holiday! They retreated with their families and dogs to Hawaii, where they reportedly “spent several days on the island of Kauai just before Christmas,” an eyewitness told E! News. On one of those vacation days, the couple was photographed lugging snorkeling gear across a sandy shore, Katy in a two-piece floral bikini set and Orlando in hot red board shorts. SEE KATY AND ORLANDO’S CUTE VACATION PHOTO ON THE HAWAIIAN BEACH, HERE.

Katy first shared a photo from the trip, documenting her and Orlando’s dip near a gorgeous waterfall, on Dec. 22 — check it out below! “End of the rainbow kind of love,” the “Swish Swish” singer captioned the picture, which shows her and the Pirates of the Caribbean star with their arms around one another and throwing up peace signs. Orlando’s 7-year-old son, Flynn, and the actor’s mom also came along, according to E! News’ eyewitness, and they had a full itinerary. “Orlando, Katy and Flynn went snorkeling, swimming and hiking around various tourist hot spots on the island, like Wailua Falls,” the outlet’s source said.

This isn’t Katy and Orlando’s first nor second trips to Kauai, the insider noted, as “they know their way around and always visit their favorite spots.” And here’s an especially sweet detail — the eyewitness claimed the pair was having a “great trip and are very in love.” Their matching red poodle dogs, Nugget and Mighty, even tagged along for the trip, and dressed appropriately for the occasion. Orlando posted a picture of the cutest tourists we’ve ever seen: one pup was in a coconut bra and grass skirt get-up, the other in an aloha T-shirt…see the shot below.

end of the rainbow kind of love ?

end of the rainbow kind of love ?

keeping with the dog photo theme…I got nothin ?

keeping with the dog photo theme…I got nothin ?

This successful getaway makes us even more excited for what’s to come between Katy and Orlando! In October, we heard that Orlando has “actually been showing a lot of signs that an engagement will happen soon,” as a source EXCLUSIVELY told HollywoodLife! “Ever since they go back together he’s been very transparent with her so she never has to wonder where he is or who he’s with, he’s totally committed,” our source explained. “He also talks about their future together and makes comments about what a great mom she’ll be.” Katy and Orlando have both been previously married, Katy to actor Russell Brand and Orlando to former Victoria’s Secret model Miranda Kerr.