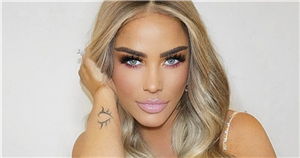 Katie Price has denied reports she's set to go under the knife in Turkey on Tuesday 15 June.

The 43 year old former glamour model was said to have jetted to Turkey to have £12,000 worth of work done, which she has since denied.`

Katie was rumoured to be getting a full body liposuction, a brow and face lift as well as new teeth.

Mum-of-five Katie, who recently revealed her mucky mansion transformation will be filmed by Channel 4, has slammed the reports in an Instagram story after jetting to the red list country with fiancé Carl earlier this week.

Katie shared a screenshot of the article which made the claims and wrote: "So I'm sorry but this story is wrong !

"And when I do do anything and what it will be revealed on my", before she then added a YouTube sticker underneath.

It comes after it was reported by The Sun that Katie had revealed hopes to have liposuction in order to lose weight before having IVF in a bid to have her sixth child – which would be her first with hubby-to-be Carl.

Katie's rep told the publication: "I’m afraid I do not have the procedure date – but it is expected to be today."

The TV personality, who recently announced a new book about life with son Harvey, was said to be set to go under the knife at Mono Cosmetic Surgery, after reportedly gaining two stone following her accident which led to two broken feet last year.

Katie told the publication: "I have tried so much to lose weight, obviously we want a baby and we’re doing IVF.

"I just want to shift some weight before we do it so I am going to have surgery."

Meanwhile, Katie's rep is said to have added to the publication: "After overcoming her horrific injuries – two broken feet and subsequent extensive surgery to fix them – Katie has opted for a procedure she deems a mental 'pick me up'.

"She is not addicted to surgery and will be upset if anyone takes this stance.

"Katie cannot run, as is her usual method to shed weight – she has maintained her health and is otherwise fit but the weight remains.

"This weight is also putting pressure on her feet causing her constant pain.

"She has the full support of her friends and family."

After jetting to Turkey, Katie revealed she was using appetiser suppressant drink Boom Bod in a sponsored post on her Instagram story and page.

Katie posted a smiling snap of herself holding the drinks. She wrote to her 2.6million followers: "#ad turning the summer bod UP with @boombod just in time for summer

"These little shots contain 1g of glucomannan per serving which with an energy-restricted diet aids in weight loss, and always get me right where I need to be

"Still have time to feel summer ready too ladies! Programs are buy one get one right now at boombod.co.uk".